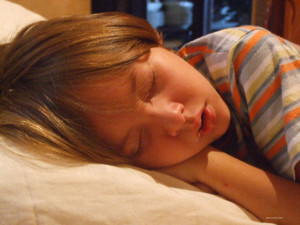 There is more and more research being done regarding the potential link between Attention Deficit Hyperactive Disorder and children’s sleep issues. It’s well documented that we are all getting less sleep than we used to. In fact the amount of people who are getting less than seven hours of sleep each night has increased by over 30% since 1960. That’s a huge increase! And for children, a lack of sleep, coupled by rigorous daily schedules may be contributing factors to what may be sleep deprivation, instead of ADHD. In fact, I find that many parents aren’t sure exactly how much sleep their children actually need (hint: it’s more than you think!).
In a recent article for the New York Times, Vatsal G. Thakkar, a clinical assistant professor of psychiatry at the N.Y.U. School of Medicine, posed an interesting question: Are we confusing ADHD with sleep deprivation? As a society, we are living in a world where ADHD is becoming the common solution for children who bounce off the walls, act out, or exhibit other behaviors that may seem extreme. In fact, Thakkar points out that “It might just be a coincidence, but this sleep-restricting lifestyle began getting more extreme in the 1990s, the decade with the explosion in ADHD diagnoses.”
Parents often mistakenly assume that if their children are sleep deprived, they will react by becoming lethargic, cranky, and unmanageable, rather than hyperactive. This may be because doctors and parents are just beginning to understand the potential link between this type of behavior and children’s sleep issues. Thakkar surmises that some of these behaviors may actually be attributed to a lack of deep (delta wave) sleep.
In fact, research done in 2004 found that 100% of children with ADHD showed a deficit of deep, or delta, sleep. In another study published by the Journal of Pediatrics, children were scheduled to have their tonsils removed due to sleep issues (sometimes the tonsils can obstruct the airway, causing breathing difficulty). Of the children scheduled for this surgery, 28% were found to have ADHD symptoms, including hyperactivity and trouble focusing. What’s even more interesting is that one-year post-surgery, half of those children no longer met the criteria to be diagnosed with ADHD. That’s a pretty stunning finding! Apparently, they had just been suffering from a much more difficult to diagnose sleep issue.
We all know how it feels to lack a good night’s sleep…imagine if you didn’t know what that felt like? Children may not have the verbal acuity or knowledge to explain that they are tired, or didn’t sleep well. As parents, it’s up to us to observe their sleep and try to make the best possible decision on their behalf.
Obviously, there is a lot that we all still need to learn about sleep, especially regarding its connection to Attention Deficit Hyperactive Disorder. So how can we as parents make sure that our children are not misdiagnosed?
For starters, we can learn from the research. We can start by watching and listening to our children when they are sleeping. Does your child toss and turn? Or is he a chronic snorer? These are potential signs of sleep deprivation (and potential signs of apnea or other problems that should be addressed with your pediatrician), and should not be ignored. If you have concerns regarding your child’s behavior or sleep patterns, don’t be afraid to bring them up with your pediatrician. Be persistent if need be.

What do you think of this research?