If she’s sleeping 8:30 p.m. to 8:30 a.m., you’re going to have a lot of jealous parents who probably feel like you don’t have a problem, because that is amazing! You didn’t mention if she wakes up in those 12 hours, so I’m going to go ahead and assume that she’s sleeping through.

Part of me says if it’s not broken don’t fix it, but the Sleep Lady in me says it really is better to regulate her wake up time, and regulate sleep so that it’s in sync with her circadian rhythm. We all have a circadian rhythm, and our children start to develop their own at around 4 months of age. It does matter that we sleep in sync with our internal clock, and when we sleep off of our circadian rhythm, the sleep is not as restorative and this throws us off. It’s like constantly being jetlagged, because we’re going to bed at all different times. They say even we adults should go to bed around the same time, wake up around the same time, and only vary it by an hour, even on the weekends. Now, I don’t even do that all the time. I do try but it’s especially true with our children. There are lots of studies that show that it’s healthier for us, and our children are better learners when their sleep is regulated and in sync with their circadian rhythm so that they’re well-rested. 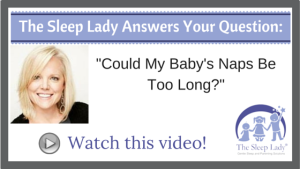 I’m hesitant to tell you to wake her up earlier in the morning but if you start to see that she either starts waking up during the night or you’re having other problems with her bedtime, then I would start waking her up at 8:00 a.m. Eventually one day she’ll go to school, which will be here before you know it, and you’ll have to get her up much earlier than that. But that probably seems like a million miles away from here.

I would see if she could have a nap a little bit earlier so that her nap ends by 12:00 p.m. (noon) so that it’s really a morning nap. Usually our bodies are geared to be awake during that lunchtime period and then again later on in the day. I’d love to see her morning nap go from 10:30 a.m. to 11:30 a.m. Then her next nap would be from 1:30 p.m. to 3:30 p.m. With these changes, you might see her needing to go to bed earlier.

You might have to change her naps slowly. What I would do to make it slower in the beginning is to shorten the morning nap, which will then move her afternoon nap earlier, which will then bring bedtime earlier. If these changes are starting to make that wake up time too late, I’d start waking her up at 8:00 a.m., which would be much better so we could have an 8am to 8pm type schedule.
Although, if 8:30am to 8:30pm worked for you and your family and worked for her, great. That’s where I would start. First, shorten the morning nap to push her afternoon nap earlier so that the bedtime stays on the earlier side, which is currently a little later than average for her age, especially if she sleeps through 12 hours. I would only wake her if she sleeps past 8:30 and ideally, 8:00 a.m. Okay, enjoy that sleep!
Video filmed by In Focus Studios