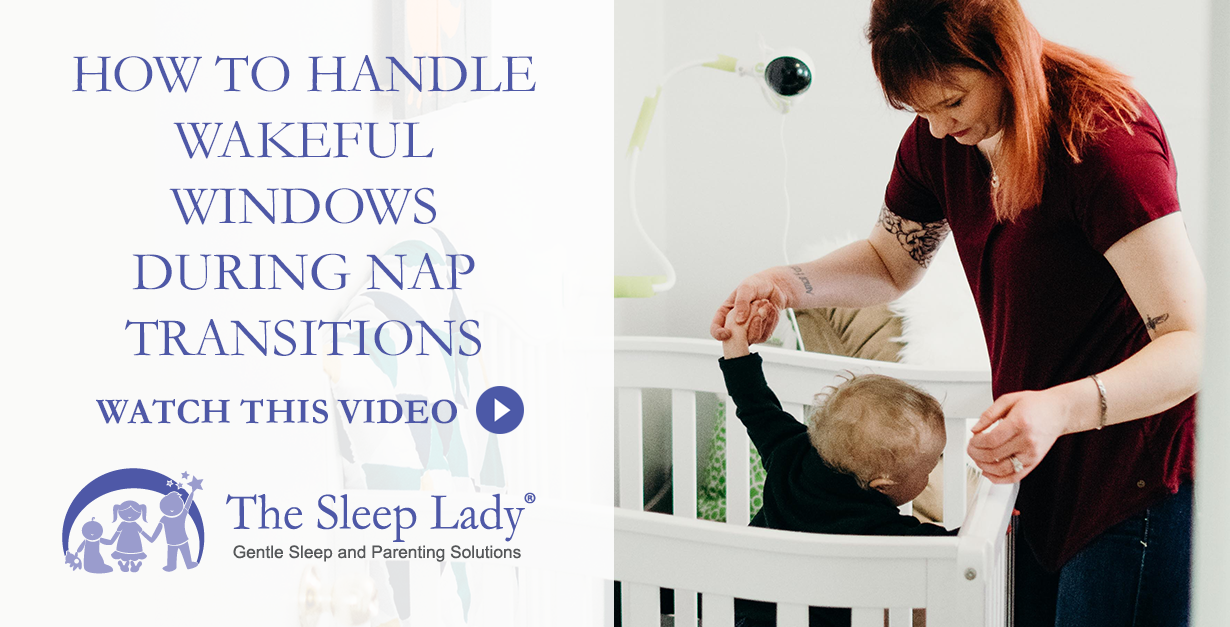 Hi. I’m Kim West, The Sleep Lady, and today I’m going to answer Miriam’s question about wakeful windows during nap transitions:
“My eight-month-old son is breastfed, rocked to sleep, and sleeps in our bed. He’s also taking solids and is close to walking. We love him so much! But I just need some sleep and my husband back in my bed.
“He’s dropped his third nap. Even going for walks won’t knock him out which means he can go from 1 p.m. to 6 p.m. wide awake. That is five hours which is a long time for his age group. I’ve had to bring bedtime forward to 6:30 p.m. He gets up around 5:30 a.m. His first nap is around 8 a.m. and it is 40 minutes to an hour long. His total nap times are between 2 and 2-1/2 hours, usually. I’ve tried to do more, but he never wants it.
“Yesterday, after reading advice from various sleep experts, I tried the method of getting him to take naps in the cot. It did involve me getting into the cot with him. I’m light and it’s a travel cot. I breastfed him to sleep and it worked. I tried the same routine for bedtime. He resisted at first but then he did fall asleep. He woke after an hour and a half, though, so I repeated the process. But, he woke three times in an hour. At that point I cracked and brought him to bed. He woke up every hour anyway.
“I’m resolved to keep him in the cot tonight. I’m going to gently stop the feeding at night as I know he doesn’t need it, but it’s a learned crutch. Any advice? I can’t handle any crying. It’s just not my style. I just want him to sleep even if it is four hours together.
Miriam
P.S. By the way, I’m going back to work in two months.”

Miriam, luckily you have eight weeks to get things in order. I would suggest that you start sleep coaching at night after a great day of naps. Even if you need to nurse him to sleep for a third nap that day I would recommend that. I would like him to not have such a big wakeful window from 1 p.m. to 6 p.m. A very long wakeful window can lead to increased night wakings and early rising.

Slowly push his morning nap to 8:30 a.m. and then to 9 a.m. over the course of a week or two. Make sure he’s getting at least 2 ½ to 3 hours of total sleep during the day. For now get the nap hours in any way you can, even if you have to nurse him to sleep and hold him the entire time. It is important for him to be well-rested before sleep coaching.

Next I would focus on bedtime awake. The method that you tried — getting in the cot with him and nursing him to sleep — sounds like it didn’t work well. You’re not the only mom who has tried that before, so don’t worry!
I recommend that you carry out your soothing routine in his room. Do this with the shade down but nurse him with the light on. Don’t allow him to get too drowsy. You don’t want him to think that you’re going to let him fall asleep while nursing him and then put him in the cot. We really want him awake and aware that he’s being put in his cot. Stay next to him and go through the rules of The Sleep Lady Shuffle, which will be a gentler method. When you do The Sleep Lady Shuffle you can pick him up to calm him down and you will not be leaving him to cry it out.

Some Crying Is Normal

I don’t believe that there’s any sleep coaching method that involves absolutely no crying. If you want to continue to co-sleep with him safely and nurse him throughout the night, then that is definitely an option until you’re ready to make some changes. But, if you really want to make the shifts now, then you need to know that there will be a bit of crying involved. After all, you’re changing his routine and he doesn’t understand why.

The big difference is that you’ll be staying there with him, offering physical and verbal reassurance, and you won’t be leaving him alone. Those are all very important differences from “cry-it-out” methods.

Decide on a Weaning Plan

You said that you wanted to gently wean him. I would encourage you to create a weaning plan and discuss it with your doctor. Also, you need to decide how many feedings, if any, he needs during the night as well as how much he should be eating during the day. This way you can feel confident that he doesn’t need to eat more than that during the night.

How to Help An Early Riser

Lastly, we need to address the early rising. Even though I know you get up at 5:30 a.m., ideally you want him to be able to get up a little bit later. This will make his morning nap too early. And too early an morning nap tends to ingrain the early rising. Then a baby definitely needs a third nap in order to avoid that long wakeful window from his afternoon nap to bedtime.
I hope that this all makes sense. The good news is that you have two months to address this and it won’t take nearly that long once you get started.
Video filmed by In Focus Studios