Would you like me to answer your baby sleep problem in my next video? If so, post your question on my Facebook Page! I will pick several questions a month to answer and post them here on the blog!

Hi. I’m Kim West, The Sleep Lady, and today I’m going to answer Lauren’s question:
“My 20-month-old sleeps great at night but fights napping in his crib. He just stands and screams at the top of his lungs forever. If we’re in the car or stroller he’ll pass out. How do I correct this?

A Nap Is Still Needed At Twenty Months 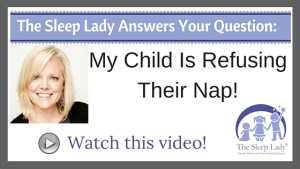 On average, twenty-month-old children need 11 hours of sleep at night and 2 hours of sleep during the day.
You said that he sleeps great at night. First, I would want to make sure that it’s closer to 11 hours- especially since he’s not napping.

Timing of Bedtime and Naps

Next, I want you to look at the timing of both the nap and the bedtime. You may be putting him in too early for a nap or too late for bedtime. The goal:

Its essential that your toddler is awake at bedtime. He may be too drowsy at bedtime because he’s nap deprived (and exhausted). If he is conking out really quickly at bedtime then he is missing the opportunity to master the skill of putting himself to sleep from a wakeful state.
If he hasn’t mastered it at bedtime (the easiest time) it will be MUCH harder to learn it at nap time which could be one of the reasons he is crying so much. 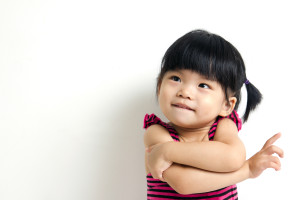 After you have found that perfect nap time window, I would try seeing what happens if trysitting next to his crib when you put him in after his soothing pre-nap routine. Close your eyes yourself, pat the mattress, and encourage him to lie down. Make sure the room is really quiet and dark and that there are not a lot of distractions.
Encourage him to lie down instead of laying him down yourself. If you think that maybe he is being too playful with you because you are right there, you can either scoot away or you can lie on the floor. From that new spot you can quietly reassure him, “Shh, shh, shh. Mommy is lying here until you’re asleep. Lie down.”

Beware Of The Nap Crutch

Be careful that you don’t fall into the “Mommy’s-going-to-take-a-nap here”- crutch. If you say that he may become dependent on you lying there and napping with him, then that will become a new problem to address.

Stay For An Hour

Give it an hour with you there in the room before you give up on him taking a nap. If after an hour he does not go to sleep you should leave the room. You could say, “Mommy has to go potty,” (or something) and come back in after one minute. Turn the light on and say “Nappy time is over!”
Make sure you don’t say things like, “Oh, you didn’t sleep and so now we’re going for a drive and you’re going to take a nap in the car.” Some children this age that I have helped will say “Car,” when you come back in after a minute. They figure out that that’s what you’re going to do next so be careful!

Have a Back Up Nap Plan

Next, take a little break with him. Maybe have a snack and a sippy cup of water   and then go for a car ride or stroller walk for at least 30 or 45 minutes for a nap. The idea is to make sure he gets that nap in so that he doesn’t become even more sleep deprived.
If he doesn’t fall asleep for this “back up nap” then plan on an earlier bedtime….even as early as 7pm.

Nap coaching takes about two to three weeks, Lauren, so try to be patient and get through this process. It will be worth it in the end.
Video filmed by In Focus Studios