Baby Colds: How The Sniffles Can Mess Up Your Baby’s Sleep Patterns

For those of us who were forced to take physics in high school or college, you may recall a physical property related to the flow of air through a tube. That property stated that as a tube became more and more narrow, the harder it was for air to flow through that tube. That difficulty worsened exponentially the smaller that tube became. Then as if we thought we’d never need to understand that principle beyond the final exam, suddenly we have a baby or young child with a stuffy nose from a cold or from allergies. It then makes a ton of sense how that little stuffy nose results in a terrible night’s sleep. Learn many reasons why your baby may have trouble breathing at night: 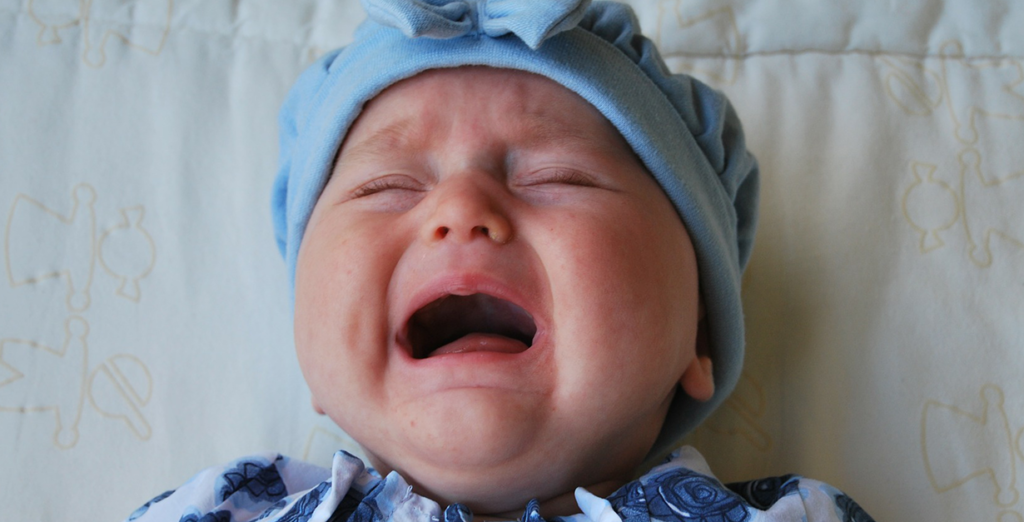 If it’s hard for air to get past that swollen nose then it’s hard to breathe.  If it’s hard to breathe then we can’t possibly be comfortable enough to sleep.  Because our babies and toddlers and young children have such little noses and airways to begin with, any extra swelling, narrowing or obstruction takes a tremendous toll especially on sleep patterns. With this in mind, there are numerous respiratory conditions throughout infancy and childhood that wind up being particularly problematic for sleep.  Some such conditions can include the common cold, gastroesophageal reflux, asthma, allergic rhinitis (hay fever), snoring and obstructive sleep apnea.

Newborns Only Breathe Through Their Nose

The common cold or any viral infection usually results in cough and nasal congestion. For the first few months of life, babies are what are known as obligate nose breathers. That means that they only know how to use their noses to breathe. Therefore any amount of nasal congestion in a newborn can result in significant trouble breathing.  Such a baby can spend the whole night awake, tossing and turning and screaming and crying just trying to become comfortable enough to sleep.  For a baby with a cold, a lost night of sleep may be the smallest problem given that some babies with colds even require hospitalization because of the respiratory difficulty. For better or for worse, nowadays cold and cough medicines are no longer recommended for youngest baby and children. One simply (and oftentimes painstakingly!) needs to wait and watch as the cold goes away on its own until sleep can return to normal again. While no one modest intervention is going to work for every baby, there is frequently some value in the use of a cool mist humidifier or in elevating the crib. I tend to avoid nasal saline sprays simply because in some children they wind up being irritating and it’s never clear which child will benefit and which child will not.

Gastroesophageal reflux (GER) is another very common condition that can make it hard to breathe during sleep. As a baby or child refluxes their stomach acid or stomach contents, that acid can come up the esophagus as high as the back of the throat and mouth.  This can result in swelling of the back of the throat or tonsils or nasal passageways.  This brings us back to the original concept, namely swollen and narrowed air passages that makes it harder to breathe. In fact, common presentations of GER related to breathing can include: noisy breathing, snoring, restless sleep, multiple nighttime awakenings and crying throughout the night. A simple visit to the pediatrician, pediatric pulmonologist or pediatric gastroenterologist can identify the classic redness and swelling in the back of the throat. Sometimes it is as simple as using anti-reflux medication in order to decrease the swelling and lead to improved sleep.

Asthma is another condition where the major problem is swollen airway passages. Those inflamed passageways make it harder to breathe. We hear all about the wheezing and the cough that heralds the attack. What is less often realized is how even very mild asthma can fragment sleep. Some might say that if someone’s asthma is so mild that there is no cough or wheeze and no apparent need for medication then perhaps it is not problematic. I would challenge that. If mild asthma has swollen your bronchiole tubes just enough to make you breathe a little faster at baseline, then perhaps your sleeping respiratory rate is 18 breaths per minutes (BPM) rather than the normal 14-16 BPM.  Those extra 2-4 breaths per minutes have a way of exacting their toll. Those extra breaths raise your heart rate, lighten your sleep and fracture your sleep architecture.

Sleep Architecturedescribes the expected percentages of time that one tends to spend in various sleep stages.  In fact there are numerous clinical research papers describing this exact concept; namely that mild, but poorly controlled asthma can destroy one’s night sleep. Some simple breathing tests with a pediatric pulmonologist can usually identify the airflow obstruction and lead to appropriate treatment. Treating asthma has long been known to improve sleep and in so doing improve growth and development. As you might expect, treatment is directed towards opening the airways and allow for easing of the passage of air. Sometimes the swelling in the airways is limited to the nasal passageways in the form of allergic rhinitis or hay fever. Once again, because of the swollen nasal passageways sleep can become quite difficult. Identification of the particular allergic trigger and/ or treatment with nasal steroids and histamines is frequently effective at shrinking the nasal tissues and easing one’s sleep. Most children tolerate inhaled and nasal steroids without any side effects. Some children however can experience disturbed sleep as a result of the steroid itself in which case the strength of the dose or the timing of the administration should be adjusted.

Is it Really A Cold? Obstructive Sleep Apnea in Babies

Another entity which is actually defined by narrowed breathing passages and disturbed nighttime sleep is obstructive sleep apnea (OSA).  OSA is characterized by repetitive partial airflow obstruction or intermittent complete airflow obstruction during sleep. This can result in sleep disruption and even loss of oxygen in the bloodstream. In a majority of children OSA is due to enlarged tonsils and adenoids. Enlarged tonsils and adenoids block the upper airway, with this blockage worsening during sleep. As we go to sleep, and our airways and our chest wall muscles and our neck muscles go to sleep too, this obstruction is accentuated. The way a child combats this is to do whatever it takes to open up and enlarge the airway. This is accomplished by waking up in order to take a deeper breath.

Accordingly, one of the hallmark symptoms of OSA is restless sleeping. Children with OSA will toss and turn all night long, struggling to take a deeper breath. Most children with OSA snore as well. Other symptoms include sweating, snorting, breathing pauses (apneas), arousals and leg kicks. The arousals and wake-ups oftentimes serve as a starting point for bedwetting, night terrors and nightmares as well. Furthermore, the sleep disruption takes its toll the following day with children frequently experiencing hyperactivity, impulsivity, poor school performance, and irritability.

Many children diagnosed with attention deficit disorder with hyperactivity (ADHD) actually have OSA and disturbed nighttime sleep as the source of the problem.  The peak age for obstructive sleep apnea is between two and five years old although it can occur at any age from infancy on up. Research estimates that OSA can occur in 2-4% of children; however, nationwide surveys have estimated an incidence close to 10%. While big tonsils and adenoids are a major cause of OSA, other etiologies can include: weak muscles from neurological disorders, bony problems of the face, jaw and head, and obesity.

Diagnosis of OSA can be made through an overnight sleep study. The sleep study is a painless, non-invasive way of monitoring heart lung and brain function which can tell how disturbed a child’s sleep is and what is causing the disturbance.  Since the majority of children have tonsils and adenoids to blame for their OSA treatment oftentimes involves removal of the tonsils and adenoids. Adenotonsillectomy opens up the airway and allows for easier breathing and a more comfortable night’s sleep.

The common cold, gastroesophageal reflux, asthma and obstructive sleep apnea are probably the most common causes of sleep disruption from a respiratory standpoint. Any entity, however, that makes it harder to breathe, no matter how mild, can make a child’s sleep uncomfortable. An underlying breathing disorder should always be considered in any pediatric patient with restless sleep, and noisy and troubled breathing especially if standard behavioral interventions have failed to help make sleep happy and comfortable for your baby or child.  For further information about these disorders and others please feel free to visit my website.