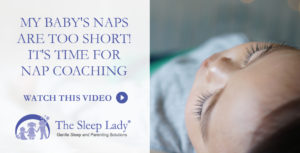 A mom named Terra wrote in and asked the following question about her baby whose naps are too short:
“I have a baby sleep problem. My baby is almost 6 months old. I’m working on getting her 3 regular naps a day. What should I do when naps are too short? She will often wake up after only 30 or 40 minutes. She doesn’t always wake up crying and usually her eyes will pop right open and then she will stay there and play, suck her thumb, play with her lovey, talk to herself, etc. Should I go in and try to get her back to sleep or is she old enough that I should just leave her in there for an hour and a half each time whether she is sleeping or not? Thanks, Terra”
At 6 months of age, you can do a lot of nap coaching. But I want to just clarify how I would encourage you to do nap coaching.

How to Nap Coach

I don’t know how well she is sleeping at night but let’s assume that she is sleeping well during the night.  Maybe she’s getting about 11 hours of sleep at night whether it’s with a feeding or without a feeding and you’re watching those nap windows. I don’t want her to get too overtired. Her daytime sleep windows are approximately 1.5-2 hours from wake up in the morning to morning nap, and then 2 to 3 hours between morning nap and afternoon nap. That’s assuming she has had a decent morning nap — least 45 minutes long. The third nap is not an exact science in terms of the number of hours but you don’t want our baby to be awake more than 4 hours between afternoon nap and bedtime. You need a total of about 3-1/2 hours for a six-month-old.
Hopefully, you’re putting your baby down awake at bedtime because that’s essential. It’s the easiest time for her to learn how to put herself to sleep. I don’t want you to start with nap training before night training. Nap training is much more difficult. If you’re putting her down awake for the first nap and she wakes up before 45 minutes it is not a “real nap”. It’s a partial arousal or as I like to call it a “disaster nap”. It’s enough sleep to take the edge off exhaustion but it’s not enough to be restorative over time and as you probably see, she is tired half an hour or 45 minutes later.
RELATED: The Sleep Lady’s Nap Coaching Tips

The “Disaster Nap” — When Naps Are Too Short

Let’s say you put her down awake for her morning nap and she takes a little bit of time to go to sleep. You’re either there doing the Shuffle or you’re doing timed checks. She puts herself to sleep and then wakes at that disaster nap time. I would go to her, reassure her, maybe hand her her lovey if she has one. Don’t get her out of the crib. At this point, you can either stay and do the Shuffle or you can leave and do timed checks. It depends on what you think benefits your baby and meets your comfort level. I would try to do this for at least 30 minutes, ideally an hour. That can feel like a long time! More than an hour is way too long and very stressful for both of you.
So to review: let’s pretend that she fell asleep at 9:00, woke up at 9:30. I’d want you to try until 10:00 or 10:30 to see if you can get her back to sleep. If she doesn’t fall back asleep do dramatic wake up and get her out. The next nap will come sooner since she only had a disaster nap. For more nap coaching tips, check out my book, “Good Night, Sleep Tight”.
Video filmed by In Focus Studios