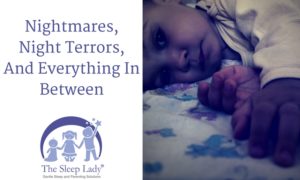 One of the most common sleep complaints parents bring up with their pediatrician is nightmares. Nightmares can be very challenging for parents and of course upsetting for your child. When trying to help improve their child’s nightmares, it is important to first makes sure that nightmares are, in fact, what is going on.
There are several similar sleep disturbances that people often think are nightmares:

All of these are common sleep disturbances that have been called “nightmares.” There are also some rare sleep conditions that parents sometimes confuse with nightmares. For this article, we will discuss the common disturbances.

What Is A Sleep Cycle?

At night, your child goes through 3-4 (or more) repeating sleep cycles. These sleep cycles all have a similar pattern, except that they have increasing amounts of REM sleep (when we dream) and decreasing amounts of deep sleep.
Because of this, sleep disturbances that happen during deep sleep tend to happen early in the night, often during the first 3 hours after a child falls asleep. Sleep disturbances that happen during REM sleep often happen later in the night.

Nightmares occur when children are dreaming (which only happens in REM sleep). They tend to happen after a child has been sleeping for 2-3 hours. Additionally, because nightmares happen while your child is dreaming, if you wake your child out of a nightmare, she will be able to remember at least part of the nightmare.
Finally, it is very easy to wake a child out of a nightmare. You should be able to gently nudge them, or talk to them, and you will be able to wake them and stop the event. 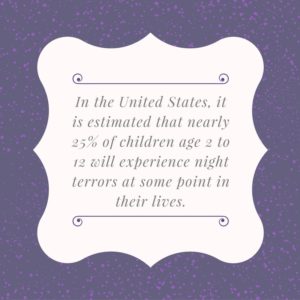 Night terrors, which occur during deep sleep, can be similar to nightmares, but have some important differences that you can use to tell them apart:

Sleepwalking and confusional arousals are in the same family as nightmares – they both occur during deep sleep.
When sleepwalking, your child will not act scared or frightened. They will simply be walking at night.
Confusional arousals are a fancier name for sleep talking. If your child seems scared, or frightened, then the episodes are more likely to be nightmares or night terrors.