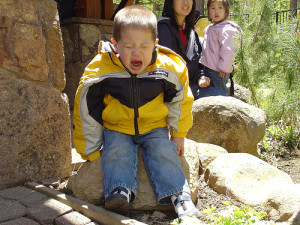 Any parent with a toddler (especially a 2 or 3 year old) has been through a tantrum. Sometimes you can see them coming, and sometimes, they take you by surprise. I recently talked to a mom who was out at the grocery store with her toddler, so she was trying to hurry. And then it happened. He saw something that he wanted and started to scream…and scream, and scream, and scream. I can only imagine the frustration and embarrassment as she hustled to quiet her toddler, get the groceries and make it home as quickly as possible.
I know that she’s not the only one. Temper tantrums are equally common in both boys and girls, and usually occur between the ages of 1 and 3. That’s not surprising when you consider all of the major changes that come with walking, talking, getting your molars and eye teeth, it’s no wonder that they have bigger emotions. Often, your toddler is learning independence, and has discovered greater motor skills, but doesn’t have the vocabulary or the impulse control to calmly tell you “Hey mom, I’m really frustrated and upset right now.”
So instead, they yell, they scream, and they throw a tantrum. I’ve found that there are generally 3 types of tantrums: frustration tantrums, exhaustion tantrums, and temper tantrums. Many parents automatically assume that every tantrum is a temper tantrum and that simply isn’t true. Toddlers have a limited ability to express themselves, and tantrums ALWAYS get mom and dad’s attention (right?).

Have you ever counted down the minutes to naptime only to have your toddler refuse to sleep? I remember days when I was beyond frustrated because one of my girls just would not go down for her nap. It happens to everyone, even me. Often, when your toddler refuses a nap, it indicates that he’s overtired. It’s very hard for a child who’s hit his second wind to go to sleep.
To help prevent exhaustion tantrums, take a good hard look at your toddler’s sleep schedule. Make sure that his wakefulness windows and naps are appropriate for his age, and that you’re not accidentally expecting more awake time that he’s developmentally capable of.
Remember, it takes an average of 20 minutes for someone to fall asleep, so if he’s out as soon as his head hits the pillow, then he’s overtired. Make sure that your toddler is getting to sleep at an age-appropriate time. A normal bedtime for a toddler is around 7:00 p.m. Although that may seem early, an early bedtime will ensure that your child is happy, well-rested, and more prepared to deal with his day. 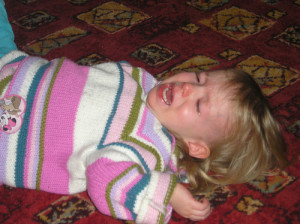 I often talk to parents whose children have tantrums when they’re working on a new skill, which isn’t surprising. Imagine watching everyone around you perform calculus, but being unable to figure it out yourself. Your toddler is learning to walk, run, climb, and all the time watching you. You’ve got this down, mom; but he’s having trouble master the skills. That causes frustration.
Another common form of frustration tantrums are those that occur when we remove our children from dangerous situations, such as climbing the stair railing (on the outside!), or playing “Peter Pan” off the back of the couch. These activities are all fun and games for your toddler, but they’re dangerous and heart-stopping from a parent’s perspective.
When you’re dealing with frustration, if you can, remove the offending item, and distract your child with a toy that is both engaging and fun. If you remove your toddler from a potentially dangerous situation, don’t back down. Stick to your guns, and don’t reason with him. He’s not going to understand why you stopped his “fun.” Sometimes, mom just has to say “no.”

A Note From The Sleep Lady: Along those lines, if we swoop in and “fix” before our children have a chance to problem solve, then they always expect us to swoop in. For example, if your child is having a hard time putting the last piece of a puzzle in place and is getting frustrated, consider offering words of encouragement. Just acknowledge that the puzzle can be frustrating. Offer ideas to solve the problem without doing it for him: “Why don’t you try turning the puzzle piece”. Finally, let your child know that you will help him if he asks by saying, “Tell me when you would like me to help you”. This will help him work thru his frustration while implementing your ideas or asking for help after he has tried it himself without success. You may just avoid a tantrum!

Perhaps the granddaddy of all tantrums, the temper tantrum can occur at any point in your toddler’s day. Unfortunately, it usually just means that he’s in a bad mood, or he doesn’t like it that you said “No”! Sure, he could be tired (and if it’s close to naptime or bedtime, this may very well be the case), or maybe he got frustrated with his puzzle. Whatever the cause, temper tantrums are no fun for mom and dad.

Some tantrums can be prevented. Often, frustration and temper tantrums are your toddler’s way of getting your attention. It goes to 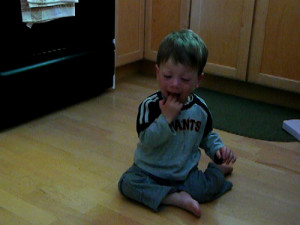 reason that if your toddler is screaming for attention he feels like he isn’t getting enough of it. Make sure that you catch your child doing the ‘positive’ things during the day, and take time to sit down and play.
Additionally, try to look for places where you can relinquish control. Toddlers are independent people, and they get frustrated when they feel that they are able to do something on their own, only to have mom step in and do it for them. Look for ways that your toddler can be independent in his world. Maybe he can start picking out his own diaper or underpants, or even pajamas. Maybe he can choose the order of part of his bedtime routine. The more items that you can give him control of, the more in control he’ll feel.
Remember that you are in control. Your toddler may be asserting his independence, but you’re still the boss. Steer him toward an appropriate activity, or (if he’s safe and can’t hurt himself), ignore the tantrum until it subsides. If he wants attention, and you don’t give him any, then the motivation for the tantrum will quickly dissipate.
Finally, pick your battles. Some battles just aren’t worth fighting. He wants his stuffed frog instead of puppy tonight? Or maybe he’d rather read Katie and The Big Snow. Give yourself a moment to reflect and consider the reasonability of your toddler’s request.
Parenting is hard work, and parenting toddlers is really hard work. They’re little babies in big bodies, with more power, emotion, and voice than they’ve ever had before. When you encounter a tantrum, take a deep breath and know that this too shall pass. Make sure that your toddler is getting plenty of sleep, has eaten on his regular schedule, and is entertained. You’ll get through this.

If you have any questions about your child’s early rising, be sure to check out my Sleep Lady Facebook Page, where we have Gentle Sleep Coaches available to answer your questions every day!

Was this article helpful to you? For more baby, toddler, and family sleep tips and tricks, please subscribe to The Sleep Lady’s Facebook, Twitter, Pinterest, Google+, and YouTube channel! If you are looking for more sleep content, please check out Get Sleep Now-an exclusive members-only area designed to provide in-depth help and support during your sleep coaching experience.