It’s bedtime. You’ve gone through the whole routine — bath, stories, songs. As you turn to leave your tiny toddler for the night, she stands up in her crib and reaches out, crying for you to come back. That’s when you hand her that precious item she loves so much. She hugs it, lies down, and settles almost immediately with her lovey. Sounds awesome, doesn’t it?

We’ve got the answers to: 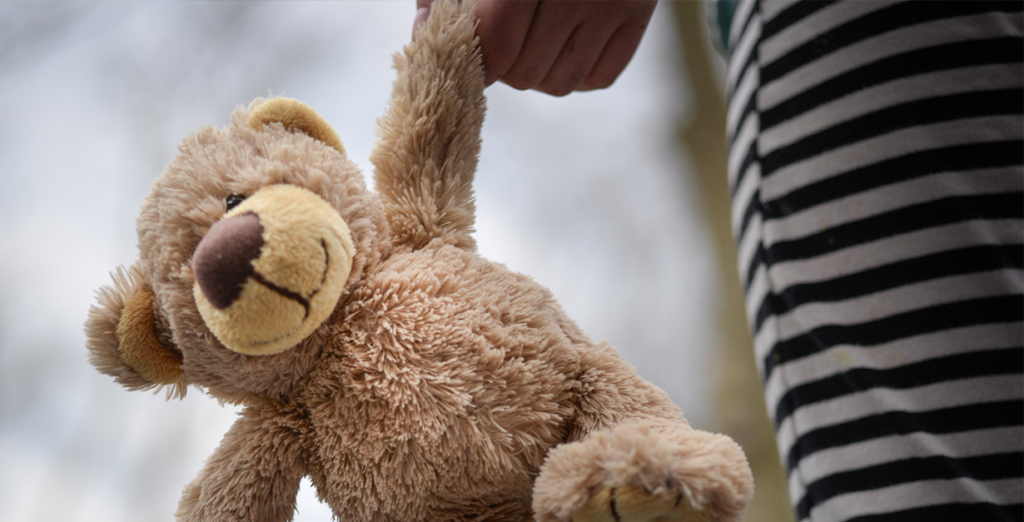 The idea was first studied in the 1950’s, when psychologist Donald Winnicott described the relationship between small children and their soft blankets or stuffies. The object helps young children feel safe and secure, and can help with the transition from total dependence on a human to independence.

When is a Good Age for a Lovey?

While loveys have been around a long time, the safe sleep rules for babies have evolved quite a bit. With the AAP recommendation for an empty crib until one year, the question inevitably comes up — when is it safe to give a lovey to my child?

Although some children develop attachments to objects earlier, most are ready to hug a special teddy bear around their first birthday. The great news is, it becomes safe right around the same time, as long as they can roll and sit up.

What Makes a Good Lovey?

Although just about any small toy has the potential to become “the one”, the best loveys are easy to grip, soft, and — can’t stress this one enough — washable.  Examples abound, with the most popular being a small blanket with a stuffy head. Bunnies, bears, monkeys, giraffes — if your baby can think of it, they probably make it.

These manufactured versions are small enough so that they won’t get wrapped around their head or neck. If your child develops an attachment to something not made to be a lovey, make sure it’s not long enough to wrap around their neck, and has no small objects that could become unattached and create a choking hazard.

Emily, a mom of two, accidentally introduced an interesting lovey to her son, Jackson. Jackson was already older and in a bed.

“Jackson had an obsession with fire trucks. I had found a 3.5-foot-long plastic one with an almost equally long ladder. Before I went to bed one night, I checked on him and was startled to see something large in his bed with him. I used my phone flashlight to discover he had pulled the fire truck into his bed and fallen asleep,” she shared.

As long as your child hasn’t developed an attachment to that giant fire truck from the playroom yet, you might have some input as to what they choose.

Pick an appropriate lovey and then take it with you to bed. That’s right! You. One of the most developed senses a baby has is smell. The idea here is to put that sweet little toy in your place at bedtime, so if it smells like you, all the better.

Introduce “Mr. Bear” or “Ms. Monkey” during your soothing bedtime routine. You could even incorporate it into your bedtime story or song. It could be love at first sight, it might not happen overnight, and it might not happen at all. If you’re lucky, they will enjoy the novelty of being able to bring something with them to bed.

“We introduced Mr. Monkey at around 12 months-old. Our daughter grew immediately attached to him. Having had a special bunny of my own that was not washable, we knew how important it was to be able to clean the monkey.”

Do you think a lovey could help with night weaning?
Read: Night Weaning After Six Months: How to Gently End Night Feedings

The Lovey as a Sleep Cue

Ideally the lovey will become a signal for sleep. “Giraffe-ey comes out at bedtime and naptime and makes me sleepy.” I know, you’re thinking, “isn’t that a sleep crutch? Didn’t you say those were bad?”
It is and it isn’t. A true sleep crutch, like rocking or hand-holding until your child falls asleep requires you. In this case the lovey is your stunt-double. Reliable, consistent, and best of all, not you.

While routines that require you, like letting a child fall asleep with you and then moving yourself or them are not recommended, that’s mainly because if she wakes up in the middle of the night, something has changed.
White noise, blackout curtains, and loveys are consistent and allow your child to self-soothe, which puts them in a different category. Loveys for the win!

The Wisdom of Duplicates

“Lovey’s are for sleep time.” And that’s where the best laid plans go “out the window.”

Children love their loveys. Sometimes they love them so much, things happen. Fabric wears, they chew an ear, they get left at Grandma’s. This is where a little planning ahead now can lead to years of peace in your home.

When you choose that special friend, think about purchasing extras. Identical extras. If you rotate them through the washer on a regular basis they’ll wear evenly.

Remember that your child doesn’t have a career, responsibilities, or years and years of facts and acquired knowledge clogging up their brain. He has lots of time and brain space to remember EXACTLY what his lovey looks like, right down to that one small worn spot on the arm he likes to chew. And he will DEFINITELY notice if that disappears on Monday evening.

Jen told us how having extras saved the day:

“Once, Mr. Monkey got left at a playdate. At bedtime, Milli discovered he was missing. There would have been no sleep for the entire house had I not been able to substitute an identical extra in his place. To date, getting identical extras was my best parenting move.”

Eventually, Jen’s daughter began to be able to tell them apart. Now almost 7, her daughter is aware of the extras, but has been content to fall asleep as long as one of the four is with her.

When Should I Take Away the Lovey?

Blankie used to be a soft, blue, fleecy dream, but it has degraded into a small, dirty-looking strip of fabric. Is it time to do away with blankie?

While some parents wean their children from their lovey, many experts say that’s not the way to go.

Unlike a pacifier or bottle, there is no physical reason to wean a child from their transitional object. Although there might be a small battle about whether or not Mr. Bear goes to Kindergarten, it’s likely that a child’s attachment to their special “friend” will become less intense as they age. It certainly depends on the kid.

Alice, mother to 8th grader Amy, recalls how her special Blue Sheep has been part of their lives even recently:

“Blue Sheep has been with the family for about ten years. Blue Sheep went to school for a while, but then the teacher told her it was time for her to stay home. Amy’s now a well-adjusted 8th grader, with many other things going on, but at the end of the day, Blue Sheep is still always there. Blue Sheep was also considered for inclusion on a recent European vacation, but ultimately decided to stay home.”

Ultimately, like every parenting decision, this one’s up to you. Some kids don’t attach themselves to a transitional object, and some do — to the point of your frustration.  Only you know your kid and what makes them tick. Hopefully now you’re armed with all the lovey information you never knew you needed!

Is your toddler experiencing a sleep regression?
Read: 18 Month Sleep Regression: How To Get Your Toddler Back To Sleep