Would you like me to answer your baby sleep problem in my next video? If so, please send me an email or post on Facebook! I will pick several questions a month to answer and post them here on the blog!

“My 6-month-old wakes every single night after only an hour or two of sleep and of course, I nurse him back to sleep. I put him to bed awake every bedtime and he still wakes, why? And what should I do about the other two to three night awakenings after that? I’m totally fine feeding him once a night but three to four times, I’m not.”

Make Sure Your Baby’s Bedtime is Age-Appropriate

I really would like to see his bedtime at 7:00 p.m. At 6 months old, babies need 11 to 11 ¼ hours, sometimes even 11 ½ hours of sleep at night, and about 3 to 3 ½ hours of naps during the day. Again, I don’t know what’s happening with naps, or what time bedtime is. Make sure that he is totally awake at bedtime, which I think is happening because you said, “I put him to bed awake every single bedtime.”

If there was a change, for example, you used to nurse him to sleep and then you changed and you started putting him down awake, did at any point he cry, fuss, talk himself to sleep so you really know he knows the skill of putting himself to sleep? If he doesn’t and he never has, and you nurse him to sleep for naps and the only time you’ve been putting him awake is at bedtime, you might want to tweak bedtime. For instance, nurse him with the light on, then a book, then kisses and then in to the crib.

Put Him to Bed Awake

Don’t panic if he fusses or even cries, because that will be a sign that he really wasn’t awake enough before. This is a pivotal piece to sleep coaching. Then you can either do The Sleep Lady Shuffle (where you stay with him and offer physical and verbal reassurance while he learns to put himself to sleep), or if you don’t want to do that, you can of course pick timed checks (where you leave and come back and check on him in intervals). Make sure that you pick him up to calm him; I’m a big supporter of that as most 6 months olds do not have the skill of self-regulation mastered. I think it’s worth trying to help him put himself to sleep, especially if he gets really worked up. 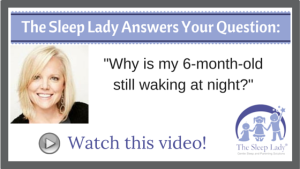 Pick the one you’re going to follow through with consistently. Start at a bedtime after day of great naps. Then I want you to create your plan for weaning. You said to me, “I’m okay with feeding once but not three or four times.” So, you can either do a dream feed where you pick the time (I usually encouraged a dream feed around a time when they typically woke up anyways, whether that’s 10:00, 12:00, or 2:00 a.m.).

If you do a dream feed, you sort of beat him to it. Go in, wake him up enough to feed him, burp him, kiss, and if you need to change his diaper do that, then back to bed. Or you could do a set time feeding particularly if you find that dream feeding doesn’t work and he doesn’t feed well and then gets up an hour later anyways. I find the success of dream feeds is very much temperament-based.
The other option is to do a set time feeding. Essentially, you would pick a time. Let’s say first awakening after 11:00 p.m., just as an example. You have to pick the time where you’re going to go in, pick him up,feed him, burp him,kiss him andput him back down. Every feeding, every waking before and after that, you’re going to use the sleep coaching method you chose. And you do that consistently. That’s how you’ll get rid of those other feedings.
I would expect that he’ll start having larger chunks of sleep at night and then you’ll be stuck with some early rising as he gets used to not being fed in the early morning. Oftentimes you’ll start your day earlier for a little while until you get a feel for what his morning window is. That’s usually somewhere between 6:00 and 7:30 a.m.
Know that you have a ray of hope, and it’s a really big one, is that 6 to 8 months is the easiest age to sleep coach a child. They tend to start sleeping through the night quickly, usually within a week. Sometimes within a few nights even, after, the one feeding of course. Know that naps may take two to three weeks.
Video filmed by In Focus Studios