Hi, I’m Kim West, the Sleep Lady and in today’s video blog, I’m going to answer Dominique’s question:
“I’m a mother with twin boys who just turned one last week. My boys have co-slept with me and my husband pretty much since the very beginning. Bringing them in to the bed with us was the only way we could ever get them to sleep for longer than 30 minutes and at the time, that’s what we did to keep our sanity.
“Now, a year later, we’re still co-sleeping with them and we know however that the sleeping arrangement must come to an end. It would be better for them and us if we transition them to their cribs. We just don’t know how to tackle this. There are number of layers to our issue. One is that they don’t go to sleep unless we rock them to sleep. Two, they are accustomed to falling asleep in our arms with the bedtime bottle and three, they’re accustomed to falling asleep with a binky that mom and dad have to pop back in to their mouths up to 4 times per night.
“Should I do to just perhaps keeping them in the bed with me and my husband but no longer rocking them and then putting them to lie down next to us with their binkies and just offering patting and rubbing until they go to sleep? Then should I try to get them to fall asleep on their own lying next to me without the binky to sooth themselves back to sleep during night awakenings without popping the binky back in? And after those skills are mastered, should I then move them to their respective cribs and work on getting them to stay asleep?
“Or will tackling this in stages set us up for failure and delay the inevitable? Shall I just move them in to their cribs and let them learn everything all at once? I’m truly at a lost. I am not a fan of the cry it out method and I want to make this switch in the least traumatic way possible. It seems like a lot of change at one time for them. I’ll welcome your suggestions and any thoughts you have in this matter.”
I wanted you to all to hear all of the details of this because this actually is a really common question and this is one of the reasons why I have so many articles not for parents who want to continue to co-sleep, but parents who want to eventually end co-sleeping. I’m going to do my best to give you a lot of helpful advice, but know that I have a lot more to say about this huge topic on the blog and in my book, Good Night, Sleep Tight.

Make a Decision About the Bottle and Pacifier

First things first, I want you to talk to your doctor about the bottle, including your plan on weaning the bottle (or how long you want to keep it). Eventually you want them to go to sleep without milk on their teeth after their teeth are brushed and then go to bed. Also, I do think you’re going to have to address the bottle and the binky at the same time. 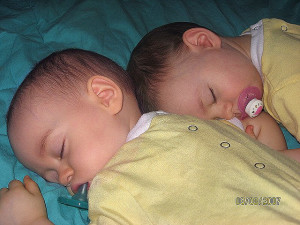 I want you to decide if are you going to keep the binky or not. Your boys should have that pincer grasp to find it and put it in. Granted it’s harder in the bed, lots of times I’ve had a mom or dad put a little rubber bowl in the bed with pacifiers and just show their child where the pacifier is. At first you start by putting it in their hands when you’re co-sleeping with them and then eventually pointing to the bowl and say, “There’s your binky,” or if there’s one right around them say, “Oh, it’s right there, honey.”
You’re right, they’re not going to be happy about that because after all you’ve been doing it for them so they’ll have to wake up a little bit more to find it. Again, that’s the only way we can teach them how to put it in their mouths themselves. If you just say, “No, I want to get rid of the binky all together,” then you might as well do it all at once and do it while you’re also not having them being held with a bottle to sleep. I do like your plan of co-sleeping with them first. I often will have parents co-sleep with a child in their rooms.

You could either start this change by co-sleeping in your room or their room if there is room for a bed for you to co-sleep with them for a little while, you’re certainly welcome to do that. Start by having them put the binky in themselves (or you’re going to get rid of it) and, of course, no rocking or bottle to sleep. Stay with them. Lie down with them. Snuggle with them. Spoon them. Pat them. Shush them. Reassure them until they are asleep and they began to learn and master that skill.
You can do this for about a week or less and then finally, move the bed out of the room. I don’t want you to sleep in the bed and then they’re in the crib because that tends to get children super upset, “Ah, how come you’re sleeping there and not sleeping here?” Not to mention that it’s really easy to just pick them up and then lie in the bed with them together and fall asleep.
Make sure you remove the make shift bed and do The Shuffle with them in their cribs at the same time. You can even start off with one parent with eachtwin Then when you’re in the middle of the room position, you’ll just need one parent for that. Again, I would do it in just two phases: First tackle adjusting bottle, rocking, binky and co-sleeping, then transition to the crib.
Good luck.
Video filmed by In Focus Studios

If you have experienced a baby who is too drowsy, please share your experience below. Please click the “reply” link under this article and leave this mom a comment. Supporting each other makes parenting so much easier!