Hi, I’m Kim West, the Sleep Lady and in this video blog, I’m going to answer Christine’s question:
“Hello. My daughter turned 14 months last week. She’s been a great sleeper until now. About two weeks ago, she started fighting her naps. It will take her half an hour to 45 minutes before she would fall asleep for her morning and her afternoon naps. She normally doesn’t fuss or make a sound and would fall asleep almost immediately. She would typically wake between 6:00 and 7:00 a.m. and I’d put her down for her first nap two hours after awakening and her morning nap would last around 2 hours.
“Her second nap would occur 3 hours after awakening from the first and would last about an hour and a half or I would often have to wake her by 4p.m. in order to not interfere with bedtime which was around 8 p.m. But two weeks ago, she started waking at 5:00 a.m. and would fight both of her naps. I started to think she was getting too much sleep overall and is ready to drop to one nap. In transitioning her, I put her down for her morning nap a little later each morning until we achieve between 11:00 a.m. and 12:00 (noon) for her nap. She would nap for about 2, 2 1/2 hours but had a hard time and would melt down between 4 and 5:00 p.m. This is uncommon.
“I started putting her to bed around 6:30, which she will fight for about half an hour and she consistently is waking up at 5:00 a.m. now. I’ve tried to go back to two naps but her sleep is out of whack. Some days the two naps work and other she completely resists them. I need your advice please. We went from a pleasant baby to a fussy cranky one and I’m at a loss of what to do.” 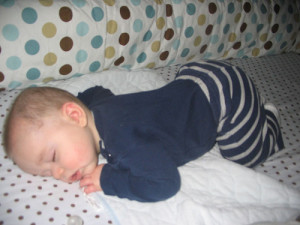 I think you need to address the naps that go from 11:00 a.m. to 1:00 or 1:30 p.m., or 11:30 to 2:30p.m. What happens when your baby naps during this time is that the window between 2:00 p.m. and 7:00 p.m. is too long, (that’s 5 hours for her) and that’s why you’re seeing her meltdown from 4:00 to 5:00 p.m., Not to mention napping at that time is a little bit off her circadian rhythm. You have to continue to push the nap later.
On a one-nap day, work towards having her nap start no earlier than 12noon. And slowly stretching to 12:30 and then to 1:00 p.m.
Oftentimes, I see parents transition their child or toddler from two naps to one and the child was sleeping through the night; then they get stuck with a nap from 11:00 a.m. to 1:00 p.m. and within 3 weeks the child starts to wake during the night and have early rising because there is too big of a wakeful window between wake up from the nap and bedtime.
I would encourage you to be open to an occasional two nap day with a short morning nap (approximately 45 minutes, or maybe even 30 minutes if she won’t sleep for 45 minutes). Try to make this morning nap around 9 or 9:30am and make sure that you wake her up at 45 minutes. , We don’t want her to have a giant morning nap and then the afternoon nap ends up too late, which of course makes bedtime late (and causes this whole spiraling effect).

I would try to keep bedtime to 7:00 p.m., which is why you might have to have an occasional (every 3 to 4 days) two-nap day to help her make it to bedtime without running on empty.
Again, don’t give up. You’ve done a lot of great work. I think you just need a few more weeks to help her settle slowly back in to the one nap schedule so that she can sleep through the night and have a great nap.
Video filmed by In Focus Studios

If you have experienced a baby who refuses to nap, please join the conversation on The Sleep Lady Facebook Page!  Supporting each other makes parenting so much easier!