Would you like me to answer your baby sleep problem in my next video? If so, please post your question on my Facebook Page! I will pick several questions a month to answer and post them here on the blog!

Hi, Kim West, The Sleep Lady and in today’s vlog, I’m going to answer Jessica’s question:
“Hello, Kim. My son Mason is 20 months old and I can count on two hands the number of nights that he has slept through the night. We followed a pretty consistent bedtime routine between 6:30 and 6:50. We begin the routine by reading a book, then bath and then after bath, it’s diaper, lotion and then he breastfeeds and then in to his jammies, snuggle for a minute and then I put him down awake and say, ‘Mommy and daddy love you, night, night.’ And then we leave the room.
“He has no problem falling asleep and does so without crying or fussing. He’s usually asleep by 7:30, 7:45. Our problem is that he wakes up after 2 hours crying and he won’t go back to sleep without one of us coming in to the room breastfeeding him, rubbing his back, or holding him. When he wakes like this, he’s usually up 2 or 3 more times during the night as well. My husband and I are so tired. Can you please help us?”

You gave me a lot of helpful information, Jessica. I want to make sure that he’s well-napped, so that he’s having at least one good nap a day. It sounds like his bedtime is at an appropriate time, but I’m not sure how you get him to sleep for naps. I would do whatever works for now, if you’re not already doing so. Then I would focus on bedtime and believe it or not, I know this sounds like I’m being a stickler here, I want you to change the order of the bedtime routine just in case he’s not awake enough to fully understand that he’s putting himself to sleep. If you notice, he needs things during the night when he wakes that he get at bedtime, the breastfeeding, rubbing his back, and holding him.

Make Sure He’s Not Using You as a Sleep Crutch 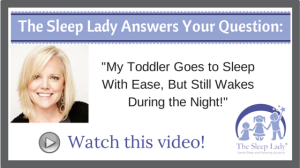 You said, “I breastfeed him and then a little snuggle or holding time.” I don’t know whether you are rubbing his back during that time and then in to the bed. Remember bedtime is the easiest time to learn to put yourself to sleep. If your child does not have that mastered completely, he won’t be able to apply this skill in the middle of the night after a 2-hour “nap” or what feels like a nap to him, and then it becomes only more and more difficult throughout the night as he gets more and more sleep even though it’s fragmented.

I would do something like bath, breastfeed, book and then bed. So, if you’re going to have snuggle time after his book, I would have lights on where we snuggle and really make sure that it’s just a minute or less, then kisses, “I love you, sweetie pie.” Turn off the light and in to the crib. If he cries at that point, I don’t want you to say, “Oh, my gosh, now the Sleep Lady ruined bedtime for us.” I want you to say, “Aha, so he really wasn’t awake enough and we need to redo this and I can stay with him and help him while he learns.”

You can either redo The Shuffle at bedtime, or if he really doesn’t protest, then go ahead and leave. But I want you to have a backup plan because I really do want him to be put down more awake than he normally is just to make sure. I promise you, this is often one of those tiny little tweaks that makes all the difference in the world. And then of course, you’re going to need to make your nighttime weaning plan and decide if you want to continue to breastfeed him during the night.
If so, then pick the one time (probably a set time feeding like first awakening after midnight, as an example), to breastfeed during the night. You choose the time, and then no time before and after. Perhaps your husband can go in during those other times. If you find that when you do breastfeed him he barely eats, then I would just go ahead and wean as long as you’re comfortable with that, and your pediatrician is comfortable. You might even ask Dad, “Please, would you go in and do the sleep coaching for the first few nights,” just because again, Mason either doesn’t know the difference, or does know the difference (that daddy can’t nurse him).
He may initially protest more when dad walks in because now he knows he’s not going to get what he wants. But just, you know, it will really help to take out that power struggle around the nursing and then be consistent with all of the night awakenings and make it till 6:00 a.m. Within 7 to 10 nights, he should be solidly sleeping through the night.
I hope that helps!
Video filmed by In Focus Studios