Hi, Kim West, The Sleep Lady and in this vlog, I’m going to answer this parent’s question:
“My 17-month-old won’t go to sleep without his bottle. And because he has been having a bottle, my 3-year-old has been having a bottle, and I am pregnant again. So, ideally, I would like my son to sleep through the night so I only need to address one screaming baby.”
What you’re going to have to do is what I call “divide and conquer.” 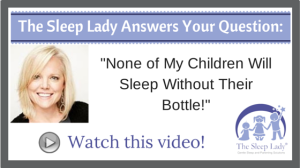 You really need to wean the bottle from both your 3-year-old and your 17-month-old. That should happen over the course of 7 to 10 days, where you slowly reduced the number of ounces in the bottles, and then you have to pick the big day where there’s no more bottle. You may have maybe sip a cup of water at bedtime, if you like, but make sure that you’re ready for the nighttime protest as well as the difficulty in going to sleep and the night awakenings.

If your partner can help out (one person go to the 3-year-old, the other person go to the 17-month-old), you can make sure that you’re consistent in your response and you don’t worry about one waking the other. It’s going to happen eventually.
You don’t want to sleep coach the 17-month-old, and then when that’s done, sleep coach the 3-year-old because that will be too long for you to be waking frequently. I don’t want you to become overtired, which makes it more likely that you will be inconsistent and then your children can still wake each other up.
You are far better off to just do both at once, sooner rather than later, and absolutely before your baby comes. Good luck!
Video filmed by In Focus Studios