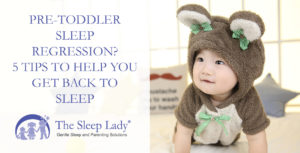 I’m not going to claim that all babies experience a sleep regression or two, but most do. If there is one period that seems to be abundantly common, it’s the pre-toddler sleep regression. This is when babies learn to crawl and/or pull themselves to a standing position. It’s a huge step in their gross motor development, and opens an entirely unexplored world. Of course they don’t want to sleep, and therefore, parents experience some very common baby sleep problems.

What is the Crawling Sleep Regression?

Most babies learn to crawl sometime between eight and ten months. That quite naturally produces another sleep regression for your child. They have mobility! There is so much exploring to do! And sleep? It’s the absolutely last thing on your baby’s list of priorities. Often, this sleep regression sneaks up on parents, since every baby learns to crawl at a different age.
If you’ve experienced the 4 month sleep regression, you may not feel fully recovered — after all, that was just a few months ago! And, unlike the 4 month sleep regression, which occurred because your baby was fundamentally changing how she slept, this sleep regression is caused by a huge leap in your baby’s brain development.
I’ve mentioned The Wonder Weeks before — a book all about potential mental leaps, and what to expect, including sleep regressions by Dutch researchers Ranjt and Plooij. Regarding this mobility growth-spurt, they noted that “Whether or not he is crawling at this stage, he will have become significantly more mobile as he learns to coordinate the action of his arms and legs and the rest of his body. Building on his knowledge of events, he his now able to begin to understand the many kinds of relationships among the things that make up his world.”

Is My Baby Experiencing the Pre-Toddler Sleep Regression?

You will find that your baby is learning and growing at an astounding rate during these three months. Often, an eight to ten month sleep regression is preceded by one or more of the following discoveries:
• Stacking
• Sorting
• Teething
• Pulling Up
• Sitting Down
• Crawling
In fact, some alert babies even learn to walk during this stage.
You may also find that your baby is becoming resistant to their current nap schedule, especially if they are still taking three naps per day. Your baby still needs 11 hours of sleep nighttime sleep, as well as two naps that add up to 3 hours . That’s usually a shorter morning nap, and a longer afternoon nap.
In addition to those growth clues, you may also find that your baby is exhibiting many of the signs that you saw during the four month sleep regression, which include:
• Increased fussiness
• Multiple night wakings (especially if your baby has just begun to sleep through the night)
• Reduced naps or “disaster naps”
• Changes in appetite 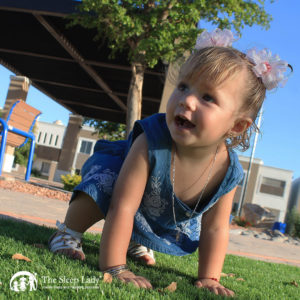 If there is one period that seems to be abundantly common, it’s the pre-toddler sleep regression. This is when babies learn to crawl and/or pull themselves to a standing position.

1. Remember, this is temporary.

Try to encourage your baby to sleep as much as possible, with the knowledge that she is just as tired as you are. If she is resistant to sleep, which is very common, make sure that you are providing her with a sleep-inducing environment and following her bedtime and naptime routines as closely as possible.

2. Offer reassurance and lots of practice for his newfound skills during the day.

All of this growth is exciting and new! Part of the reason your baby doesn’t want to sleep is that she wants to practice her new skills. After all, practice makes perfect! If you offer encouragement and praise during the day, she may be willing to sleep more at night.

3. Don’t make a big deal when she stands or crawls or walks around her crib during bedtime.

Don’t get caught up in laying your baby back down repeatedly, as he will most likely pop right back up if he’s not ready for sleep. Encourage him to lie down by sitting next to the crib so he’ll want to be at eye level with you. Pat the mattress while saying “Shh, shh, it’s time for sleep.”
If you are constantly setting him back down when he gets up to crawl or pulls himself to standing, you risk it becoming a game. Often, babies learn to pull themselves to standing before they know how to sit down, which can be frustrating.

When you’re dealing with an overtired, cranky, baby who doesn’t want to sleep, sometimes you just have to go with the flow. Try to encourage as much sleep as possible during this growth spurt, but be wary if it lasts longer than three to four weeks. At that point, you risk creating a new sleep schedule, one that you won’t want.
Also, resist the urge to fall back on a sleep crutch. Your baby needs to be put in bed drowsy but awake, or you’ll be repeating the sleep crutch all night when she wakes.

When all else fails, go back to The Shuffle and your flexible routine. Babies thrive on consistency, so simply revisiting this may help to relax your baby and encourage her to fall asleep on her own.

The pre-toddler sleep regression is quite possibly the longest and most frustrating for parents. Sometimes it can last as long as six weeks. Try not to get discouraged, and use the tips above to help you maintain as much normalcy as possible. As always, if your baby isn’t back to her sweet self in a few weeks, please consider contacting her pediatrician to see if there may be an underlying medical issue.

By The Sleep Lady
Tags: getting toddler to sleepsleep regressiontoddler sleep training

Cosleeping and Sleeping Through the Night — Is It Possible?
September 15, 2020

Common Newborn Sleep Problems and What to Do About Them
September 10, 2020
Search for articles by keyword or topic