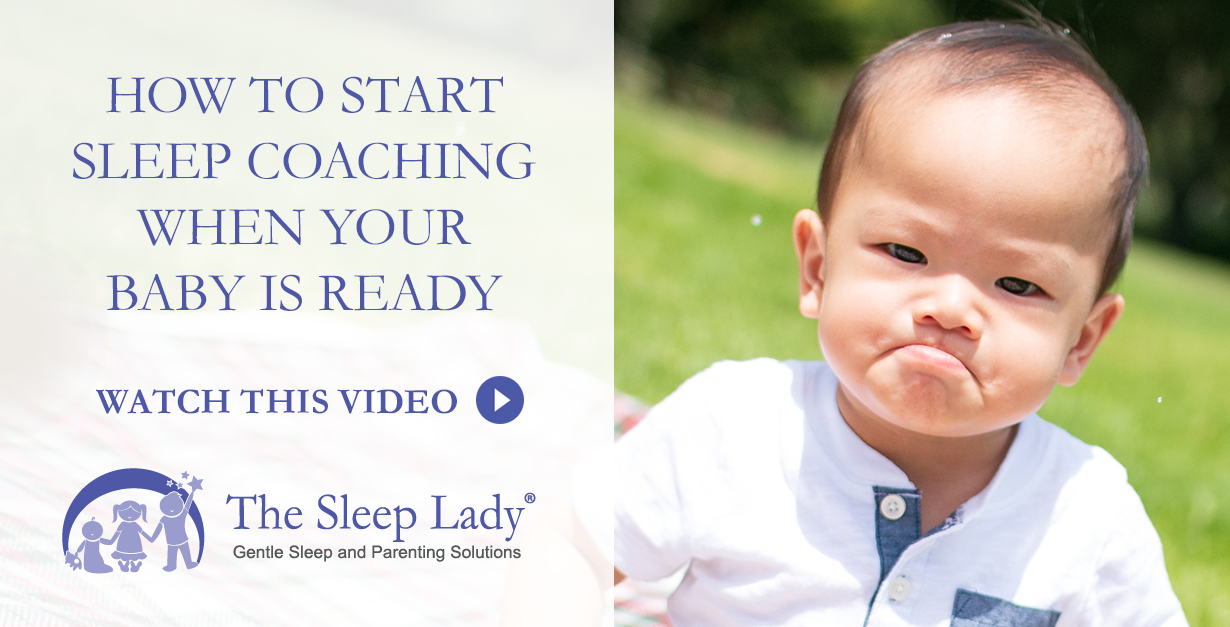 Hi. I’m Kim West, the Sleep Lady, and today I’m going to answer Nikki’s question about how to start sleep coaching:
“My six-month-old cannot self-soothe and will catnap for 10 or 20 minutes during the day. Rarely will he sleep for one to two hours during the day. Come 7:30 or 8:00 p.m., he’s so tired that he screams and screams until he finally falls asleep.
I have to get him to sleep by holding him. But when I put him down, he wakes up. It can only take 20 minutes before I can put him in his cot but then he’ll only sleep for three to four hours before he wakes up again.
“He does take some milk when he wakes up. But then I end up with him in my bed as he won’t go back into the cot. I have other children so I can’t allow him to scream. I’m mentally and physically drained and I’m so tired. I’ll be so grateful if you could help.
Nikki, you gave me a lot of information here and I have a few recommendations. It sounds like you may have to start gentle sleep coaching.

Read “The Ten Steps To Take Before Starting Sleep Coaching”

I recommend that you read the article that I have in my Workbook, on the blog and in my book, Good Night Sleep Tight, called “The 10 Steps to Take Before Starting Sleep Coaching.” This  will help you be more successful when you begin sleep coaching.

Shoot for an Earlier Bedtime

At his age I would say that 7:00 to 7:30 p.m. is a good bedtime. This also might help reduce some of the screaming that you’re seeing at bedtime because he’s so overtired.
On the first night, after a great day of naps, you start sleep coaching at bedtime. Make sure you put him down awake enough at bedtime to begin to learn the skill of putting himself to sleep independently.
If you choose to use the Sleep Lady Shuffle then you will be staying with him and offering physical and verbal reassurance when he goes to sleep and wakes up.

You said that he does take some milk when he wakes, so you want to have a feeding plan. Decide if you are going to feed him once a night or twice a night. Also, plan about what times you will do it and how much you will offer him.
This will help you to be consistent in your response which will eventually help him know what to expect. Also, when you have a solid plan it is easier for you to follow through with it consistently. Check with your primary care physician, too.

Let’s say you don’t want to do night coaching and nap coaching together at the same time. My recommendation is to do night coaching first. If you do this, then you would have to hold him, or use a carrier or stroller, to get in his naps. Help him get at least three to three and a half hours of total nap time for several days in a row before you head into the night coaching. Night coaching should start after he is well-napped.
This plan would be in place until:

Video filmed by In Focus Studios