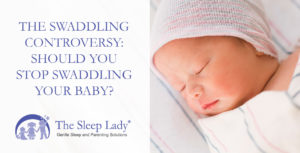 When your baby is in the hospital, your nurse hands her to you neatly swaddled, peaceful, and rested baby. Many parents take a class before their baby is born to learn how to properly care for baby, and the majority of these classes teach proper swaddling technique. That may be about to change with some new research and opinion that has come to light.

Not Everyone Agrees On Swaddling

According to a recent Huffington Post article Swaddling Ban: Why Are Daycares Banning Baby Burritos?, there is a growing trend toward NOT swaddling. The American Academy of Pediatrics and American Public Health Association recently released its third edition of “Caring For Our Children”, which advised caretakers against swaddling.
An article in The Globe and Mail states, “Several studies have linked swaddling to a higher risk of respiratory infections and, if done improperly, hip dysplasia. Swaddled babies may overheat, especially if their heads are partially covered, which can cause hyperthermia and even death. There is ongoing debate over whether swaddling prevents infants from waking easily, hinders weight gain or, most troubling, increases the chance of SIDS.”

Does a Swaddle Make a Happy Baby?

Now, before you jump to conclusions and throw your swaddle blankets out with the trash, consider that it has been shown that swaddling is very helpful to some parents in soothing their fussy baby.
In fact, Dr. Harvey Karp of The Happiest Baby on the Block is often credited with the reemergence of swaddling as a common practice is less than happy with this new advice.
In an article for Parents magazine, Karp stated, “In 2011, the group decided swaddling (even in gossamer thin blankets) was unnecessary and risky and should not be used after a couple of weeks or months. They said swaddling might hurt a baby’s hips—but while there has been a connection between improper swaddling and hip dysplasia (with legs wrapped tightly while straight), it’s safe when swaddling allows legs to bend up and out at the hips. The group also said that swaddling might overheat a baby (no study shows overheating from swaddling, unless the head is covered or the room is hot), or might cause SIDS if loose blankets wrap around the baby’s face (studies show that only loose bulky bedding—like comforters—are a SIDS risk, not light muslin ones).”
With all of this conflicting information, what’s a responsible parent to do?

It’s important to remember that these new recommendations are targeted at childcare facilities, such as daycares, and that as a parent; you need to consider the facts and make a decision based on your baby’s needs and temperament.
It’s also important that you use proper swaddle technique. New research suggests that instead of pinning the baby’s arms at his sides (as was traditional), that allowing baby’s hands near his face is not only safer, but will assist him with self-soothing. Putting your baby’s hands up may also help if your baby happens to flip himself over in the night.

Do Not Swaddle Too Tightly

When you’re swaddling your little one, be sure that the swaddle is not too tight. You do not want to restrict breathing. You also want to be sure that your baby is able to bend her legs while swaddled to help prevent hip dysplasia.

If you choose to swaddle your infant, it’s a good idea to keep an eye on him with a video monitor. You can also pop in to check on him, or consider roomsharing to ensure that his sleep is supervised. 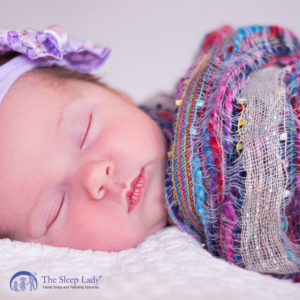 Does a Swaddle Overheat Your Child?

Much of the concern regarding swaddling (besides the possible suffocation risk), is the fact that your baby may overheat. In a recent article the Breastfeeding Reporter found that swaddling is not always a positive thing for newborn babies. This study compiled findings from 176 mothers and babies, some who were swaddled, and others who were just put in clothes. They found that “When swaddling is added to other newborn stressors, it appears to worsen their negative effects.” This report goes on to state that skin-to-skin contact seemed to have the most positive results, and that those infants who experienced skin-to-skin contact instead of swaddling actually had higher body temperatures.

Breastfeeding is a great opportunity to gain additional skin-to-skin contact with your baby, and as the previous research suggests, it may raise your baby’s body temperature. Err on the side of caution and (if you chose to) swaddle your baby after they have been fed and burped.

If you want to ensure that your baby feels loved and secure, consider a sleep sack rather than a swaddle, which will prevent loose blankets in the crib. You may also want to look into options that only restrict the hands, which are often the source of night awakenings as a result of newborn’s startle reflex.

According to neurologist Richard Restak, MD, “Physical holding and carrying of the infant turns out to be the most important factor responsible for the infant’s normal mental and social development.” Look for other ways to soothe your baby, such as shushing, patting, holding, and rocking.
I realize that this is a lot of information for anyone to process. The important thing is that you do what is best for your family. Do I think swaddling is bad? Not really. But I do think it is important that you make an informed choice.

By The Sleep Lady
Tags: baby sleep adviceparenting adviceParenting TipsWhen Should I Stop Swaddling My Baby

The Benefits of an Early Bedtime — Tips from the Sleep Lady
November 20, 2020

My Baby Learned to Stand and Now He Won’t Sleep Through!
November 11, 2020
Daylight Saving Time: Tips for Falling Back Gracefully
October 20, 2020

Reflux and Baby Sleep: Helping Your Infant with GERD
October 20, 2020
Search for articles by keyword or topic

Get our biggest savings of the year! 40% OFF our gentle sleep video course!