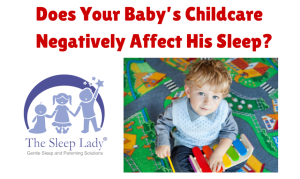 One of the most frequently touched on questions that I receive involves naps (or lack thereof sometimes) at childcare. And WHY does your child sleep differently at childcare and home? And what if childcare nap schedules are different than what you do at home? How can you ensure that your child naps/sleeps well at home, just like they do at childcare?

It’s important to note that not every child has trouble when it comes to sleeping at childcare or sleeping at home, but many, many children do. Part of this is simply that the environments are different, and sometimes it’s a bit more complex than that.

Let’s start with this mom’s question:

“We’ve used a modified version of the shuffle to help our now 14 month old son with nighttime sleep through a few sleep regressions, with good success.   We are now struggling with early rising, which I believe is related to being overtired from daycare. Our son started daycare Monday through Thursday at 12 months, and unfortunately, was forced to drop to one nap during the day, in the afternoon.

He usually takes a 2 hour nap there, going down around 12:30 p.m. When he is home Friday through Sunday, we’ve continued to let him have his morning nap (around 9:00 a.m.) and he often sleeps a solid 2 hours and then takes another 1.5 -2 hour nap in the afternoon.

We’ve added an extra layer of curtain to make his room as dark as we can and have been trying to get him back to sleep in his crib with minimal interaction (a quick pat, tell him it’s not time to get up, followed by “shhh” from the corner of his room or outside his door if he starts talking), and he will sometimes get quiet but not asleep and other times be very fussy.

My husband and I are having difficulty getting on the same page about how to approach this and I would love some advice, especially related to whether we should stop giving him the morning nap Friday-Sunday to try to get him on a more consistent schedule and maybe help him nap longer in the afternoons at daycare.   Thank you for any thoughts you can share!”

Know How Many Naps Your Child Needs 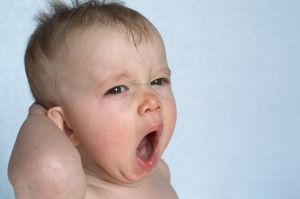 Most childcare settings offer a single nap during the day for “older” children, which unfortunately often includes one-year-olds. As your baby grows, their sleep needs change, but most children are not developmentally ready to drop their morning nap until between 15 and 18 months old. Know that watching your child’s cues is always more important than his age and averages.

That being said, some children are ready as early as 12 months, but they are definitely not the norm.  Knowing this, it may be worth speaking to your child’s care provider and inquiring about adding the morning nap back to his schedule, at least temporarily.  Explain that since shifting him to one nap during the day he is starting to have trouble with his night sleep. Even if your childcare provider could do this every other day it would help, so it’s worth asking!

Work With Your Child Care Provider

While not every childcare can accommodate two naps a day for every child (though I feel they should), it’s worth asking the management if there is a way your child could return to two naps a day.  Perhaps there is another room he could nap in, or he may be able to join the “smaller” children for a morning nap.  Present the problem to your provider, and see what is possible.  You may need to remind them that in three to four months your son will be developmentally ready to transition to one nap and this will no longer be an issue.

Use The Weekends and Be Open to Some Mini Naps

If two naps are not an option, make sure that you keep to a 2-nap schedule on the days that he is not in childcare.  Although not ideal, this will help to make sure that your child is getting as much sleep as possible, when it is possible.  During the week, you may need to be a bit more creative.  For instance, if your son snoozes on his way home from childcare I would let him.  Normally, I would not recommend a super early morning nap as it may ingrain the early rising, but in your situation it may be necessary (at least temporarily) since he will need to make it until 12:30 p.m. for his one nap during the week.

Naps Are Not The Enemy 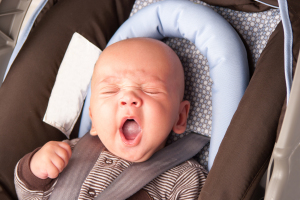 If you know that your child definitely needs more than a single nap every day , (which most children under 18 months do), and your childcare is unable to change things around for your child, consider moving his naps around until you find a suitable compromise.

One option is to allow a nap before you drop your child off at childcare, which is only truly feasible if this nap could be at 45-minutes (remember we don’t want disaster naps which make for a rough day.), which means that it’s either on the way to childcare, or before you leave the house. Remember that early morning naps can be tricky, as I mentioned above.  Be careful if you choose this option, as you do not want to encourage early rising.  For some babies, a morning nap isn’t a problem, and for others it means waking before the crack of dawn.

The other option is to sneak in a little bit of extra sleep by allowing a car nap on the way home. If you choose this, make sure that there is a suitable window between the end of the car nap and bedtime to avoid a struggle and your child catching a “second wind.”

Know What to Watch For

At some point, your child really will be ready for just one nap per day, so be sure to watch for signs that this may be the case. If you notice that your child’s morning nap is pushing his afternoon nap later and later, or that your child begins to rise earlier, or he stops taking an afternoon nap after a good morning nap, it may be time to phase out the morning nap altogether. This usually happens, as I’ve mentioned before, around 18 months.

Be Aware of Potential Sleep Crutches

Many parents find that it appears that their child is sleeping “so much better” at childcare than they are at home. But what does this really mean?  Many childcare settings rely on rocking, patting, shushing, and other “sleep crutches” to help your baby sleep. If your baby is used to being patted to sleep for naps, then of course this is going to affect both nighttime sleep and naps at home.

It may not be realistic to ask your childcare provider to sleep coach your baby or toddler. If this is the case, instead ask them to help you fill your baby’s daytime “sleep tank” as I like to say. For example, if your baby needs close to 3 hours of naps and tends to nap at certain times at home, share this with you provider and ask them if they can follow the same schedule. Give them permission to use whatever sleep crutches they find work for them, to ensure that your baby will sleep at night!  At least you won’t be picking up an exhausted baby who may very well have a difficult night’s sleep.

Whatever your childcare situation, it’s important that you and your childcare provider communicate effectively to encourage good sleep habits no matter where your child is sleeping.

Share your daycare nap success stories with us on The Sleep Lady’s Facebook Page. Supporting each other makes parenting so much easier!