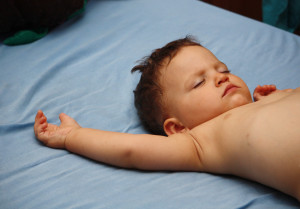 Check out the baby sleep article below printed in the UK’s paper the Telegraph on April 22, 2010. Make sure that you read the very last sentence. I will comment further there.

What is the Best Baby Sleep Advice?

In Penelope Leach, elder stateswoman of childcare gurus, say so. In a new book she argues that regularly leaving a baby to cry could damage its brain and make it anxious in later life.
Miss Leach, who’s an honorary research fellow at the Tavistock Clinic, says recent scientific research backs her up. Saliva swabs, for instance, have shown up  increased levels of cortisol in distressed babies whose cries have not been responded to. Cortisol is the stress hormone, the one middle-aged executives with heart disease usually have too much of before they finally keel over. Neurobiologists say cortisol could be toxic to infant brains.
In contrast to Miss Leach, Gina Ford, the other baby-care guru, advises leaving babies to cry for set periods so that they may settle themselves to sleep. The infant learns to console himself, as it were. Fans of Miss Ford’s strict methods always says “Oh but they work!” Miss Leach doesn’t deny that they work. But she says that’s just because the baby has “given up”, which makes it sound as though the baby has submitted, pitifully, and its will has been crushed.
“The reason babies raised on strict routine regimens go to sleep, usually with less and less crying, is because they are quicker and quicker to give up,” she says in the Guardian. “Their brain has adapted to a world where they are not responded to. That kind of early-induced anxiety may relate to anxiety right through adult life.” I must say it sounds convincing. It’s certainly not credible that babies of 18 months or less are being deliberately “manipulative”.
Anyway, it’s interesting to note that Miss Leach’s new book, titled The Essential First Year – What Babies Need Parents to Know, is given the prime spot all over page three of today’s Guardian. It confirms that childcare techniques divide along political lines.
Roughly speaking, authoritarian conservatives approve of Gina Ford’s no-nonsense routines. On the other hand, free and easy liberals tend, more often, to allow their babies to run the show – feeding them “on demand”, letting the adored babies sleep in the grownups’ bed until they’re five, and so forth. I suppose the best way is probably somewhere in between.
I bolded the last sentence because i think it is the most important sentence yet they end the article there! There was much heated debate on their website over this article mainly criticizing these two experts for not having children, for parents not using their intuition in parenting and concerns over what kind of problems can be caused by “over responding” to a baby. Wow. So much analzying can really paralyze the most intelligent, well meaning parenting.
A point about crying damaging the brain. I would like to refer to this excerpt from my book where I discuss this research:
When a young baby or toddler is crying, he is telling you that he wants or needs something. And that’s all his brain can concentrate on at that moment. When you calm him by helping him meet that need, his brain can focus on other things. But if you don’t respond to that need, if you repeatedly ignore the cries, it can lead to overstimulation and lay the groundwork for later difficulties. Some research suggests that a pattern of unattended crying can actually affect the “wiring” of the brain. A baby whose brain becomes used to chaos may seek out chaotic situations later in life. Now please note that I’m talking about a pattern of prolonged unattended crying. I don’t mean that a little bit of crying will destroy your child’s psyche or prevent him from forming a secure attachment. You will not scar your child for life if he fusses (safely) in his swing while you are right nearby taking a shower. Naturally, we are less tolerant of crying with a newborn than we are with an older baby. That’s one reason I recommend only the gentlest of sleep coaching techniques in the first few months of life, and I don’t introduce my Sleep Lady Shuffle until a baby is six months old.
I know I am biased but I happen to believe that The Sleep Lady Shuffle can be that “somewhere in between” method of sleep coaching  your child! As you may know the most successful sleep coaching method is the one that is the right match for your child’s temperament, your parenting values and the one that you can follow through with consistently!