“Hi, hoping you can help. My daughter will be 6-months old in September and is exclusively breastfed. She is my second. She’s on a good schedule and is in bed by 8:30ish. At 3 months, I broke her night feeding and she took a paci. At 4 months, I had stopped swaddling her because she would sleep – she would flip over under her stomach and now, she sleeps soundly in her stomach. She’s been doing well for the past couple of months only waking one or two times a night. I go in and give her the paci and walk out. I don’t engage her.
“Then we went on vacation last her week where her pack ‘n’ play was in our room so she would wake and be inconsolable. I got into the bad habit of feeding her because nothing else worked whether (SL: that’s super common, we have to do whatever we can while on vacation). We’ve been home for a few days and she’s not sleeping well. I’m a fan of crying it out. I did it with my first son. But now my concern is keeping him sleeping and not have her wake him. He’s 3 years old. She’s been inconsistent.
“But as an example, last night she woke up at 11:20 which has never happened before. I fed her. She went back to sleep, woke up several more times and I gave her the paci. Not sure if it is development, teething, out of routine, vacation, et cetera but I do know that I’m tired and I’ve been perpetuating a bad habit of feeding her. My husband went in last night instead of me because I thought it would go better with him as when she sees me, she sees food. I almost think she’s more agitated when we go in. I followed your book and continue to reference it and hopefully, you might have some suggestions. Jen.”

Jen, you’ve given me lots of helpful information. Following the 10 tips for sleep coaching success is essential. Then move her bedtime a little bit earlier. I’m concern that you might be exceeding her wakefulness window.
Another question is whether she is awake enough at bedtime. This is extremely important. The easiest time to go to sleep is bedtime. If you don’t know how to go to sleep at bedtime, it’s really hard to do at other times, such as the middle of the night, or for naps.

Make a Decision About the Pacifier 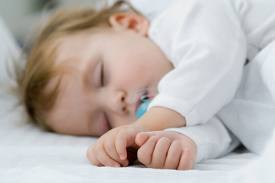 I want you to decide about her pacifier: are you going to keep the pacifier or are you not going to keep the pacifier? Not many 6-month olds have the ability to pinch the pacifier and put it into their mouth themselves. I’ve seen a few, and it’s certainly worth the try to keep the pacifier in the crib. In fact, put a bunch of them in there. Put them in her hands and see if she can start to put them in herself.
If she really doesn’t know how to replace the pacifier on her own, you’re going to either have to be in charge of putting it in for her until she learns the pincer grasp, or you will have to wean it completely which means putting her in at night at bedtime without a pacifier. You can stay and offer physical and verbal reassurance as in The Shuffle. Count on a couple of tough nights, and then it should get substantially better after two to three nights.

First of all, you need to create one. It usually doesn’t help to create a sleeping plan in the middle of the night, (I know that many of us do it because we’re desperate) it’s much better to do it during our waking hours so you can plan it out with your husband. Make sure she’s well-fed and well-napped during the day, and that you know what you’re going to do each time she wakes up at night.
If you’re not convinced that she can go all night without a feeding, then keep a feeding in there. You can either do a dream feed, or you can do what I call a set time feeding. For instance, the first awakening after midnight; whenever it is that she tends to wake and then eat well. If you eventually you want to wean that feeding, you can just reduce the number of minutes that you you nurse her.
Again, all of the other awakenings besides the feeding awakening must treated the same way. Whether it’s going in and sitting with her and doing The Shuffle or doing timed checks, do this consistently and long enough until behavior starts to change, which I promise you it will.
I hope that helps.
Video filmed by In Focus Studios

If you have experienced a baby who won’t sleep, please share your experience below. Please click the “reply” link under this article and leave this mom a comment. Supporting each other makes parenting so much easier!