Would you like me to answer your baby sleep problem in my next video? If so, post your question on my Facebook Page! I will pick several questions a month to answer and post them here on the blog!

“My son just turned one. At eight weeks he was sleeping through the night and at seven months we moved into a new house. This is the first time he was in his crib, which didn’t go so well. Now, at 12 months old, he is still not sleeping through the night. I’m chalking up the 7, 8, 9, and 10 months sleep problems to transition and the fact that 10 teeth popped through. But now he should be sleeping more.
A typical night for us looks like this: We start his nighttime routine at 7:00 p.m. We read books, he gets a bottle, and he snuggles with either me or my husband. Then around 7:20 – 7:30 p.m. we put him in his crib awake. Sometimes he’ll fuss but more recently he’s been able to soothe himself to sleep within five minutes. This is when the problem begins. He wakes up several times a night.
We have tried letting him cry it out. We’ve tried checking on him periodically. This child has endurance and he can outlast us. We’ve tried rocking him, feeding him, lying on the floor. You name it, we’ve tried it. We don’t know what to do anymore. We’ve even tried the gradual extinction approach popularized by Ferber. I’ve even read a book that says once he learns to go to sleep on his own he’ll be able to soothe himself in the middle of the night and go back to sleep.
Unfortunately none of these methods have worked. I would love to hear your input strategies on night wakings for a 12 month old. Please help.”

Jamie, I noticed that you had a nice bedtime routine (a bottle and then snuggling) as well as nice timing of the bedtime for his age. Usually a one year old needs to go to bed between 7:00-7:30 p.m. They need about 11-1/2 hours of sleep at night and 2 1/2 hours of sleep during the day over two naps. 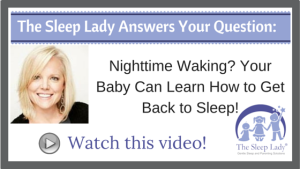 Usually when I see a child his age go to sleep within five minutes and they are sometimes fussing and are up multiple times at night, I have several thoughts:

I want him to be more awake at bedtime, so that you really do see him fussing in the beginning of the process. This will help you know that he’s learning. Of course, make sure that he’s well-napped before you start the first night, then put him in the crib awake.

You didn’t say anything about his naps, which are super important. Ideally he should have two naps at his age. He should have a morning nap and an afternoon nap. The window from afternoon nap to bedtime should be no longer than four hours. He is more than likely sleep deprived as he is not sleeping through the night yet.
Get those naps in anywhere you can and then put him down at bedtime more awake.

Decide on a consistent approach to each nighttime waking and bedtime too if he starts to cry more when you put him down more awake. Sometimes we as parents try one method one night and another method another night. Or maybe we do one method two nights and another one three nights. Then we end up sort of giving in because we feel like, “Oh my gosh, it’s not working. This is horrible and I can’t take it.”
When we are not consistent with nighttime wakings, we can potentially train our child to cry. Then, when we go to address it and are really consistent, it makes it a little bit harder. I want you to be prepared for that. I want you to pick something that you can follow through with.

To use The Shuffle, try this:

This gradual approach will help in terms of his age and separation anxiety. Also, it will help you and your husband have a consistent approach to each night awakening. Eventually your son will know what to expect when he wakes up and starts to learn how to put himself back to sleep.
It may take a couple of weeks (maybe less than that) for your baby to learn how to put himself to sleep and back to sleep. It’s possible that it may even take a little bit longer because of your multiple previous attempts.
Video filmed by In Focus Studios