Babies in Their Own Room at 4-months Sleep Longer? Not Necessarily

You may have seen headlines about a study that found that babies in their own room sleep longer and better. The study published in the June 2017 issue of Pediatrics reported that “room-sharing at ages 4 and 9 months is associated with less nighttime sleep, shorter sleep stretches, and unsafe sleep practices previously associated with sleep-related death” (Paul et al., 2017, p. 1).

Many parents might read this headline and panic a little. Current American Academy of Pediatrics (AAP) recommendations say that infants should room-share until at least 6-months for SIDS prevention, and longer if mothers continue to feed at night. Parents who carefully AAP recommendations may read a headline like this and have a tiny little parent anxiety attack. A closer, critical look at the study and how it was conducted shows that this finding (and the headlines that resulted from it) are overblown. 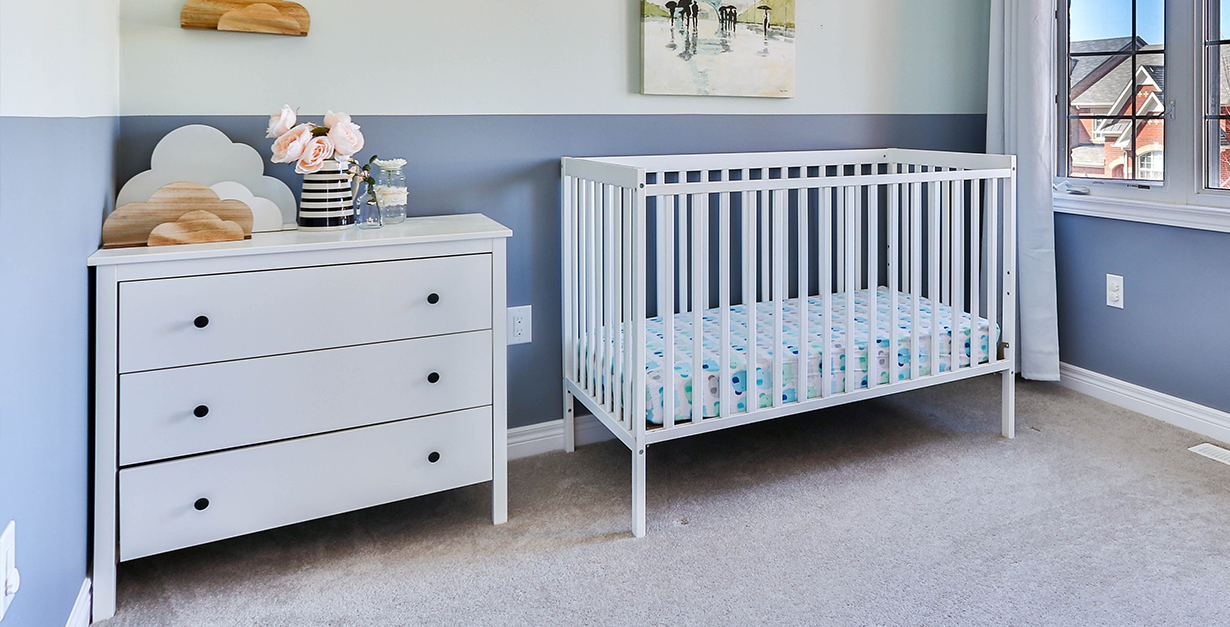 This study looked at the impact of room-sharing (having a crib in the parents’ room) on nighttime sleep duration. Participants included 247 moms (mostly white, middle-class, and all from one maternity ward). The study asked the moms about the quantity of sleep their babies got at 4-, 9-, and 12-months, and then asked them again at 30-months. Researchers separated them into three groups based on when and where the baby slept: early independent sleepers (own room <4-months), later independent sleepers (own room between 4- and 9-months), and room sharers at 9-months.

It’s important to understand that what’s “significant” from a statistical standpoint is not always significant in practical terms.

There was no difference in overall sleep at 4-months and no difference in nightwaking. The in-their-own-room babies had one stretch that was 45-minutes longer. This could simply have been because moms could not hear briefer awakenings that happened in another room. The difference in feeds was only 0.3. That’s 1/3 of one feed. In real world terms, these differences are really, really small.

By 9-months, babies in their own room were sleeping “significantly” longer.

The actual difference was only about 20 minutes and by 12-months, any differences between groups disappeared. There were also no differences in nightwakings or night feeds between the groups.

Problems With the Study Setup

Study results are always dependent on how the study was set up and how results were interpreted. This study has some big problems on both fronts:

Researchers asked moms where their babies were already sleeping, and then measured sleep behavior. This is a research no-no. To be able to test the effect of sleep location, you need to randomly assign participants to groups, not use groups that already exist.

In research, this is called a natural group. Natural groups are problematic because there can be a lot of additional factors at play besides just where the baby is sleeping. For example, the authors admitted that there were significant demographic differences between the groups. The room-sharing moms were significantly less affluent than the independent groups. They may not have had an extra room for the baby to sleep in or they may have had higher levels of stress that affected their baby’s sleep. Moms who are stressed also have more problems with their own sleep. These moms may simply have been more awake and heard their babies more frequently.

The groups were also completely different sizes. The in-their-own-room group was much larger than the room-sharing group (62% versus 11%). To really draw statistical conclusions, groups need to be randomly assigned and comparable. When they’re not, you can’t establish cause and effect between location and sleep behaviors.

Instead of objectively measuring how much sleep babies actually got (e.g., with a video camera or other monitoring device), researchers just asked moms to estimate their baby’s sleep amounts “over the past week,” or on a “typical” night. How do you summarize a week’s worth of sleep behavior with one number? Given that the actual differences in sleep between groups were pretty small, it could simply have been that there were slight errors in the mothers’ estimates.

It’s also very possible that moms whose babies were in their own room may have thought the baby slept more than they actually did —simply because they couldn’t hear the baby as easily as moms with the crib close by.

The researchers suggested that the roomsharing moms were more likely to bring their child into bed, which was then interpreted as an “unsafe sleep practice previously associated with sleep-related death.” There was no data about what the unsafe context was or whether the moms took appropriate safety precautions—only that they sometimes brought the baby into bed. In fact, other research has found that when cosleeping is intentional or routine (i.e., not done in a pinch), there is no increased risk of SIDS.

It is not difficult for parents to prepare the bedroom so that the baby has their own safe space and moms can easily breastfeed. Cosleepers or sidecar-ing the crib are ways to have the baby nearby, but in a safe, obstruction-free zone (i.e., no pillows, covers, toys, or crib bumpers. Click here for an article on safe sleep). With good safety information, parents can make decisions that work for them and are safe for their baby.

Safety is the most important factor.
Read: Safe Cosleeping: Creating a Safe Environment for your Baby

The researchers’ advice to move babies into another room by 4-months, goes against what we know about SIDS risk. Room-sharing until 6-months is protective against SIDS. After 6-months, room-sharing is helpful for moms who are still nursing at night and need a safe place to put the baby after they have nursed.

The Sleep Lady Weighs In

There are many ways to get good sleep. Early independent sleep locations may be great for some babies and some parents. However, this study is not persuasive evidence that placing your baby in their own room at 4-months is a guarantee that they will sleep better or longer. Parents need to decide what works best for their baby and their family (as well as their living situation).

Talk to your own pediatrician, use safe sleeping practices, and know that whenever your baby moves to his own room, there are gentle and effective ways to teach them to sleep on their own!

Four-month Sleep Regression
Sleep Training at 4-months: Why it may be OK (or, possibly, better) to wait