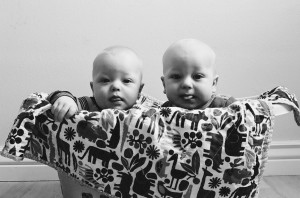 While my guidelines for sleep may be applied no matter how many children you have, things get a little more complicated when multiples are involved (especially when you start sleep coaching multiples). Parents have two (or more) babies to feed, change, and soothe. In addition, parents of multiples have the added task of coordinating a routine that works for all of their babies. One of the most important parts of this routine is your new baby’s sleep.
I often get asked how parents of multiples can help to encourage good sleep habits when they are sleep coaching multiple babies (at the same time!).

Lay the Groundwork, and Find a Routine

Parents of multiples may want to consider beginning the first stages of sleep coaching early on in their babies, as early as six weeks old (if your babies were premature, use their adjusted age). I do not advocate sleep coaching for a child younger than six months, however. Rather, in the case of multiples I encourage parents to follow some simple sleep shaping suggestions.
Try to put your babies down drowsy but awake at least once a day, and try to tune in to their sleepy cues. If you try this for 10 minutes and you get more crying than sleeping despite your soothing, then it’s okay to give up and try again another day. Many parents figure out early on that each child has a different temperament, so what works for one baby may not work for another.
These early steps will help you when you begin to formally sleep train your multiples around six months of age.

Be Concious of Wake Up Times

Try to wake your babies at the same time each morning, or allow them to wake one another to help get them on the same sleep schedule early on. If you find that one baby is consistently waking earlier, you may want to feed him, and then wake the other one. However, be sure that you are waking the babies up within 30 to 45 minutes of each other.

Remember, your babies have been sharing your womb for nine months, and they are soothed by each other, so sharing a room isn’t a huge leap. I’ve even had some families that allowed their multiples to sleep in the same crib until they learned to roll over.
You may be concerned that the babies will wake each other during the night, if they make noise, but this is usually not the case. Often, if you find that you have one baby who is consistently waking up and crying frequently, parents feel the need to rush to the rescue because they are worried that their other baby will wake, but that can actually create more disruption. It’s quite possible that your babies will be sharing a room for a while, so getting them used to each other’s sounds is important.
That’s not to say that you cannot go in and soothe your baby who is upset, you should, and gently help them calm down so that they can go back to sleep. Remember that with multiples, you are never just dealing with one baby, so the sooner that your children get used to each other’s cries, the sooner they will be able to tune them out.
Think about this: we all eventually sleep through the train that passes our house, or our partner’s snoring (ah hem…beg them to get that checked out please.), or the neighbor’s dog who consistently barks at 3 a.m. for exactly 45 minutes. Your babies will learn to sleep through each other’s cries, too.
Now, if you have a baby who is incredibly loud and waking very frequently, this can be very disruptive for your other babies. If this is the case, I would encourage you to consider separating them until your disruptive sleeper is sleeping soundly through the night, or only waking for a night feed if needed. At that point, you can return the babies to their shared room.

While I generally encourage roomsharing for multiples at night, daytime sleep is a different story. Many parents are surprised to find that most babies struggle a bit with naps. Imagine already not wanting to miss anything, and then mom puts you AND your playmate down for a nap. Instant playtime! Not exactly what mom had in mind, however. For some families, this tactic works well throughout childhood, for others, they find that they only need to separate their multiples for a few days or weeks.
Nap coaching can be a challenge with one baby, and nap coaching multiples presents a bit of a challenge, especially if your babies nap in separate rooms. If you are lucky, you may be able to get one down to sleep so that you can focus your attention on the other baby. If this isn’t the case in your house (and for most parents it isn’t), you’ll have to rotate between the babies, soothing and calming one, and then rotating to the other. You can continue this pattern, every 10 minutes or so throughout naptime (I know that you’ll be tired, but stick to it!).

Find a Bedtime Routine That Works

With multiples, bedtimes can be a challenge. You get the diapers changes, the pajamas on, and then you try to get some snuggle time, or read a story. I’ve spoken to many parents whom have said that they try to get their children in their lap or chair, only to have one stay and the other run off. And you know what? That’s okay.

From Good Night, Sleep Tight:I usually tell parents of twins to close the door, get the pajamas on, and just read. If one gets up, keep reading, try to engage her, but don’t force it. When it’s time for lights-out, it’s into the crib whether they’ve paid attention to the story or not.

For babies six months and older who are having trouble with sleep, you can utilize The Shuffle (you can find age-appropriate guidelines in my book, Good Night, Sleep Tight). If you find that one of your babies is a champion sleeper and the other needs help, consider temporarily separating them at night until everyone has good sleep patterns.
If you have two (or more) babies that need The Shuffle, I suggest that you sit between the cribs, which will allow you to move between the babies and soothe them in turn. With this approach, you should be able to offer reassurance with just your voice after a few days.

From Good Night, Sleep Tight: Twins can have different sleep needs, but they shouldn’t be wildly different, not more than an hour off from average. Some researchers have found that identical twins are more likely to need the same amount of sleep than fraternal twins. Either way, you may not get them on precisely the same schedule, but you do want them to be similar.

If you find that this is true of your babies, make sure that you are waking the babies within 30 minutes of each other, and then continue your day on a flexible schedule. The same holds true if you find that one of your babies is taking exceptionally long naps. You can wake him when your other baby gets up, and then allow a longer afternoon nap that won’t interfere with bedtime.
With twins, you always have to be on your toes, and helping them learn to sleep is no different. Don’t be surprised if you have to modify the routine a bit as they grow and change (usually when they hit a developmental milestone or growth spurt), especially when your babies are ready to move from two naps to one.
photo credit: bokeh burger via photopin cc