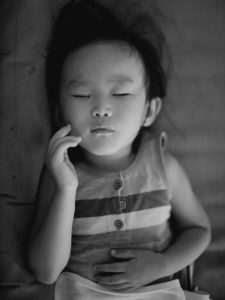 Consolidating from two naps to one is a major physical and psychological transition, with almost all children passing through the “one nap is too little, two naps is too much” phase. All we can do is try to make the transition as smooth as possible, although even in the best case scenario, your child may suffer from crankiness and disruption for two or three weeks. You may need an earlier bedtime for a few weeks while you make this transition.
An extremely common error for parents is to try to consolidate naps prematurely. Many parents will let their twelve-month old take a two or three hour nap in the morning. The child will then refuse to sleep in the afternoon (due to the long morning nap), and never make it until bedtime without a melt down.
Toddlers usually are ready to drop the afternoon nap by fifteen -eighteen months. A little earlier or a little later is normal, but be sure to watch your child, not the calendar. Especially watch for changes in your child’s morning nap patterns. It may take her longer to fall asleep, or she may wake up from the nap earlier. She may also sleep so long in the morning that she won’t nap in the afternoon, meaning you’ll have a very overtired toddler by bedtime. Don’t mistake one abbreviated morning nap for the sign that your child’s ready for change. When the pattern becomes consistent, the time is right to begin the transition.

When you are ready to begin the transition, push your child’s morning nap a little later. Try delaying it until around eleven o’clock for two or three days. Then push it until eleven thirty for a few days, then to noon, and so on. Your ultimate goal should be to have her asleep by twelve thirty or one o’clock.

Remember, there is an art to sleeping! We must teach our children the proper way to sleep in order for them to recognize their own need for it later in life. It’s tempting to cut out a nap in a baby’s schedule for convenience, but remember, you both will pay the price later at bedtime! Take time to enjoy this small window of opportunity when you are offered two breaks in your busy day. It can be a great time to concentrate on yourself or have some special time with an older child!
Sleep well!