“My son is two and a half and was recently transitioned from one nap at day care at around 11:30 or 12:00 to no naps because he was refusing to sleep until 9:30 or 10:00 pm on those days when he had a nap.”
That is not uncommon.
“As this was a cause of great stress for our family, we decided to cut out his nap. However, he is incredibly cranky. He’s tired and out of sorts from around 12:00 noon onwards. And even when I go in and try to put him down for a nap, he now fights it for all his worth. He goes to sleep relatively easily between 7:00 and 7:30 pm but he is still waking at around 5:00 am daily. And in the last 2 or 3 weeks, he stopped sleeping through the night and is now regularly waking  between 1 and 3 times a night and needs to be resettled.
“This is disrupting our sleep and his and his tantrums and tiredness our becoming unmanageable. I also have a six year-old daughter with whom he shares a room so it’s doubly important to have him sleep through the night.  I’m so tired, and I’m coming out of a long bout of post-partum depression and I’m struggling. Can you suggest anything to help?” 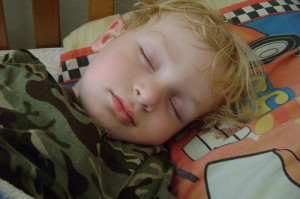 It’s really important that you act on this quickly and consistently and you get support if you need to, especially if you’re coming out of a long bout of post-partum depression. Sleep deprivation will make depression worse, and put you at higher risk. Please make sure that you have the support you need. You might have to separate your children temporarily while you’re working on your son’s sleep. That way, your six year-old daughter’s (who’s probably in school at this point) sleep is not disturbed, and you’re not feeling as desperate to get your two-and-a-half year old quiet.

Do Whatever It Takes For Naps

At this point, I’m guessing that you’ll do anything to resettle them because you’re now worried that your six year-old is waking up, too. Not to mention everyone is probably exhausted. The other thing I’m wondering is whether anything helps your toddler nap, perhaps a car? Can you take him for a car ride or a stroller walk where he takes even a 45-minute nap? If you could do that every other day, just to get that over-tired and wired thing under control, then he may start to get a little tiny bit more sleepy. That’s important, and I would just do whatever it takes in that regard. It doesn’t sound like putting him in his crib or bed is going to work, so I’m hoping that you can get the stroller or car to work.

The other thing is I want you to rule out is sleep apnea. Some common signs are snoring, mouth breathing, loud breathing at night, sweating during sleep, and restless sleeping. Is he frequently congested, does he mouth-breathe during the day, history of reflux, allergies, any of that, really picky eating? If you answered yes to any of those things, I want you to go to the pediatrician and ask them to check out his tonsils and adenoids, or to refer you to an ear-nose-and-throat doctor.
It’s very common for sleep apnea to cause early rising, which have been happening for him, and then of course, on top of it, it disrupts the naps and is causing the frequent awakenings at night.
He may not have sleep apnea, and the cause of these awakenings at night are because of the nap deprivation. I just want to make sure that there isn’t a medical issue. After all, it’s important to cross your Ts and dot your Is. Don’t forget, it’s important that you’re as consistent as possible. Please get some support to help you with your postpartum depression; I know that this can be tough and takes longer when our kids are older.
Hang in there!
Video filmed by In Focus Studios