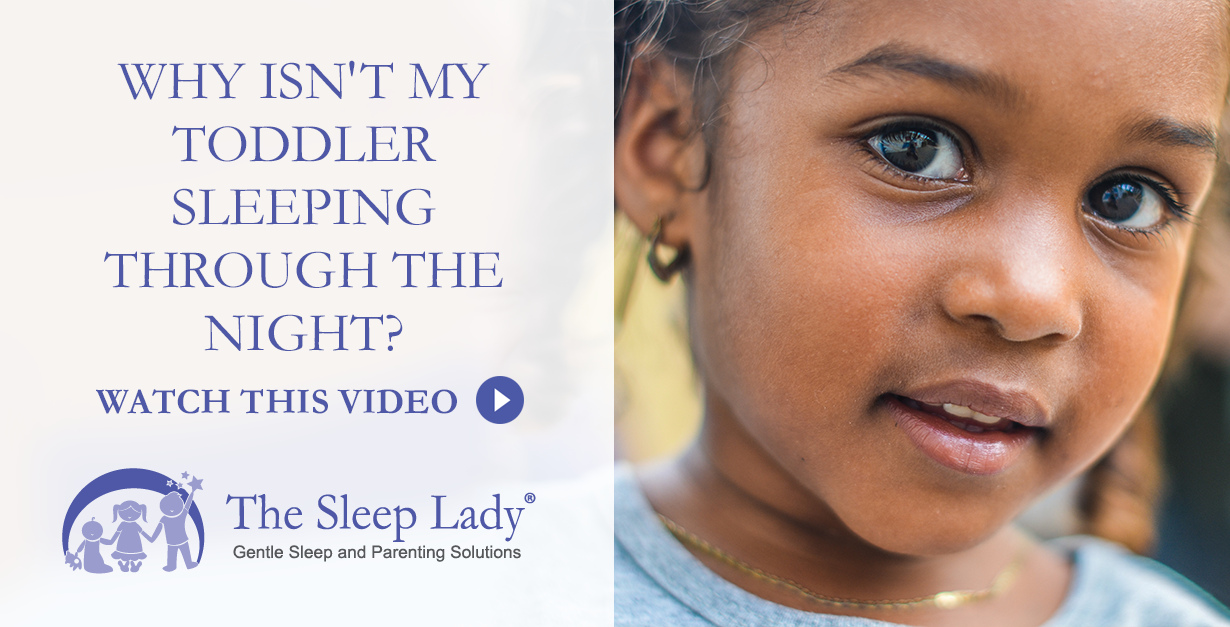 Hi, Kim West, The Sleep Lady and in today’s vlog, I’m going to answer Michelle’s question about her toddler sleeping through the night:
“My child is 1 year old and still does not sleep through the night. I’ve tried different routines and nothing changes his bedtime, which is around 8:30 or 9:00 p.m. He doesn’t have too much trouble falling asleep, but he’ll wake up around 1:00 or 2:00 a.m., and then every 2 hours afterwards. He doesn’t fully wake up, he just starts whimpering. I’ll give him a bottle if he goes too long and he’ll take it and fall asleep. Other times, I waited out and he’ll stop and go to sleep. He does have a milk allergy and he drinks special formula and was diagnosed with reflux.”

Talk to Your Doctor

First of all, I’m not sure whether he was diagnosed at 10 months old, or his reflux ended at 10 months old. So, I’m just going to make some assumptions here. First, I would encourage you to talk to your doctor about the nighttime feedings and see if your doctor thinks that your child needs to receive those calories during the night. If your child is not eating well during the day with a reflux history or his reflux is still a current issue, it’s better not to drink liquid and lie down, because it could possibly be causing more wakings later from reflux.

They do say that when we as adults have reflux, we wake up in the morning with reflux even when we haven’t eaten during the night. So, again, great discussion to have with your pediatrician so that you can feel comfortable knowing that your 1-year-old either does or does not need to eat during the night. Then you can respond consistently.
I would also make sure that some of the whimpering sounds are not actually sounds of discomfort from the reflux at night. It may not be, but again, worth having a discussion with your doctor.

Know How Much Sleep Your Child Needs

The other thing is that I want you to look at is a typical schedule and sleep needs for a 1-year-old. They need about 11 ¼ hours of sleep at night, and then 2 hours of sleep over the course of two naps until around 15 to 18 months when they can go down to one nap. So for now, he needs two naps. And usually bedtime at his age is much earlier than 8:30 to 9:00 p.m.
RELATED: Baby and Child Sleep: Sample Schedules From 6 Months to Preschool

You may be missing his sleepy signs. Usually bedtime is around 7:00 to 7:30 p.m., especially because he’s not sleeping through the night. You could potentially go to 7:30 later, but not yet. This means that 8:30, 9:00 p.m. is on the late side, so you might be missing that window which is causing more night awakenings and early rising.
Make sure that you look for that window closer to 7:00, 7:30 p.m. Start your coaching on a day where he’s well-napped and put him down awake at that 7:00 or 7:30 p.m. Do the Sleep Lady Shuffle where you can gently teach him and encourage him to learn how to put himself to sleep as you slowly move out of the room. Also, I don’t know what’s happening with naps, but they would have to be addressed.
In 7 to 10, maybe 14, nights — because of the medical issues and his age — he should be sleeping through the night!
Video filmed by In Focus Studios