Know How Much Sleep Your Child Needs 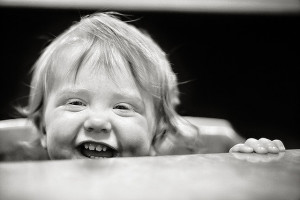 Again, you have to move naps and bedtimes later at the same time and have a consistent response to his waking and not start the day before 6:00 a.m. I know that might be an unpleasant struggle for you, but its important to set a rule that you won’t start your day till 6:00 a.m.
You could also consider a wake up light with him. A 20-month old is definitely on the early end to understand it, but I’ve seen it work as long as every time you come in at 6:00 a.m. for the dramatic wake up and point to whatever you’re using (a toddler clock or a timer on a light) and say, “Oh, your wake up light came on.” I’ve had 20-month olds who when mom came to wake them up in the morning, point to the light and say, “Light.” So they get it, but again you have to say it every time.
I hope that helps.
Video filmed by In Focus Studios

If you have experienced a baby who is too drowsy, please share your experience below. Please click the “reply” link under this article and leave this mom a comment. Supporting each other makes parenting so much easier!