A reader named Brandy wrote to me for some advice. Her daughter was sleep-trained, but is struggling after an illness, and now she cries herself sick when she is put into her crib. Here’s what she wrote:

My 15 month-old has always slept in her own bed and has gone down fairly easily. She got very sick and I was paranoid and started letting her sleep with us a few months ago. Now, I can’t get her to sleep in her own bed without her getting so upset she makes herself physically sick.  How can I get her back to sleeping in her own bed and have it not be such a stressful thing for her?  –Brandy 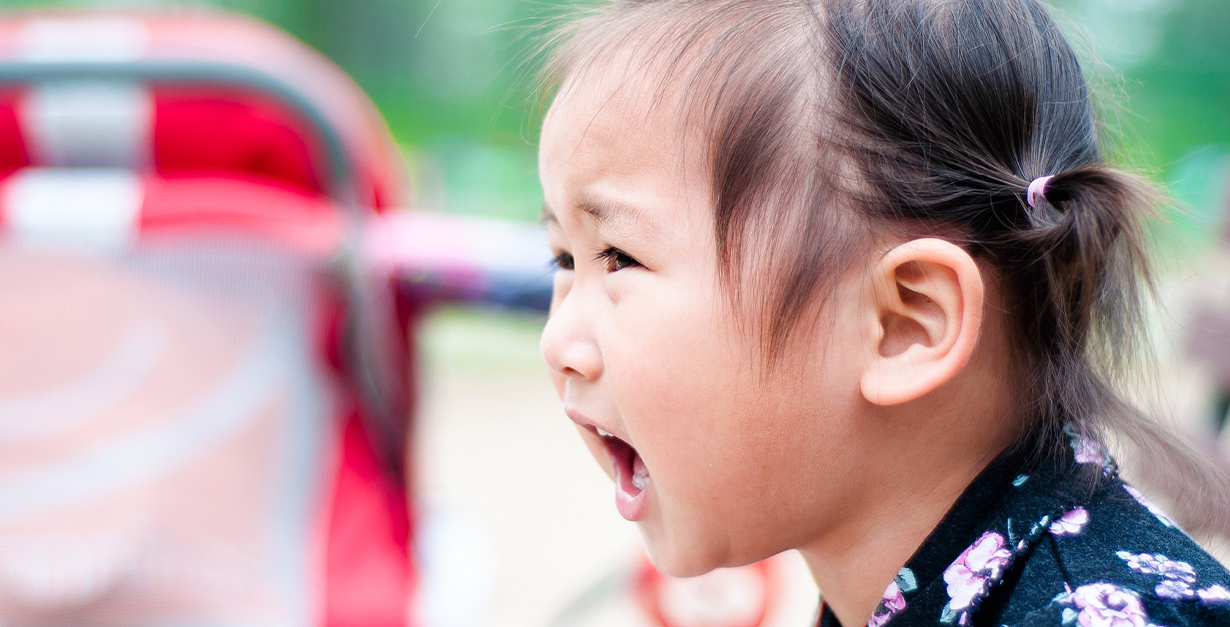 It is stressful when our toddlers throw up! The good news is that she knows how to put herself to sleep and back to sleep. She just needs to remember how. This is a perfect example of the power of intermittent reinforcement. When she got sick you regressed in what it took for her to get to sleep, and then you stayed there.

Brandy, this is very common and parents like you will often end up being there for months — if not years — sleeping with their child.

Sleep regressions are common. Want to know more?
Read: The 15 Month Sleep Regression — What to Expect

Sleep Coaching Is the Answer

Since the current situation is not working for you and you want to change it, you’re going to have to sleep coach her and put her back into her crib. I’m not saying this will be easy, and I’ll talk about the part where she cries herself sick later in my answer.

Start On A Good Day of Naps

I would start sleep coaching at bedtime after a great day of naps.

She’s either on two naps or one. The average age to transition from two naps to one is 15 to 18 months. Because she’s probably not well rested, she might still need a small 45-minute nap in the morning, and then an afternoon nap so that she can make it to bed without being overtired. Then, once she starts largely sleeping through the night, she might easily transition to one afternoon nap.

Adjust Her Intake Before Bed, If Needed

Are you giving her a bottle or cup before bed? If so, when she cries herself sick, she has a belly full of milk! I would try to move that bottle earlier in the routine. You could put that last feeding before the bath, or if that seems too drastic just reduce the amount in the bottle before bed, and make sure she really is awake at bedtime.

Again, the reason why I like to move the milk earlier and reduce it is that it’s just less liquid to throw up. I would also check with her doctor as to whether your toddler needs a bottle at bedtime and whether she’s eating enough and drinking enough during the day to wean the bottle altogether.

When it comes to co-sleeping, we are passionate about finding a solution that feels right for you.

We’re the only online sleep training course that addresses co-sleeping - whether you want to end it or safely continue. Register for Gentle Sleep Solutions today to start getting the sleep your family needs!

Then, I would use some waterproof crib sheets or a set of Quickzip sheets. You can try stacking two waterproof sheets on the bed, and if she were to throw up in the bed, you can easily take the top one off and throw it in the washer. There’s a nice clean one underneath so that you don’t have to take the whole bed apart. With the Quickzip you can unzip the sheet and zip on a new one quickly.

What To Do If She Cries Herself Sick

Now we’ve got to talk about vomit here for a minute. If there’s only a little bit on her, just take a diaper wipe and wipe it off her and wipe her face. Try not to make it a big production, turning on all the lights and putting her in the bath. You can do a more thorough cleaning tomorrow.

If she tends to throw up outside of the crib, I would put a sheet on the floor ahead of time. That way, if she does throw up, you can just scoop up the sheet and put it in the washroom.

You will want to soothe her after any episode of vomit. But don’t give her another milk bottle. Maybe give her a little sippy cup of water to rinse out her mouth a bit. Try to calm her down  — but do not hold her till she goes to sleep — and then back into the crib.

Unfortunately, you have to do this every, single time. Be careful again, that you make it as short and sweet as possible in terms of the cleanup and getting her back back in the bed.
Remember that the intensity of the crying might be a little bit worse because you have been inconsistent in your response to her more recently. She used to know how to put herself to sleep, and now she wants you to go back to that other routine of sleeping with you. Of course, she’s going to be upset.

Does your baby know how to put themself to sleep?
Read: Drowsy But Awake — The Cornerstone of Successful Sleep Training

You just need to stay with her, being calm and offering her reassurance. Before you know it, she’ll be back to sleeping in her crib.