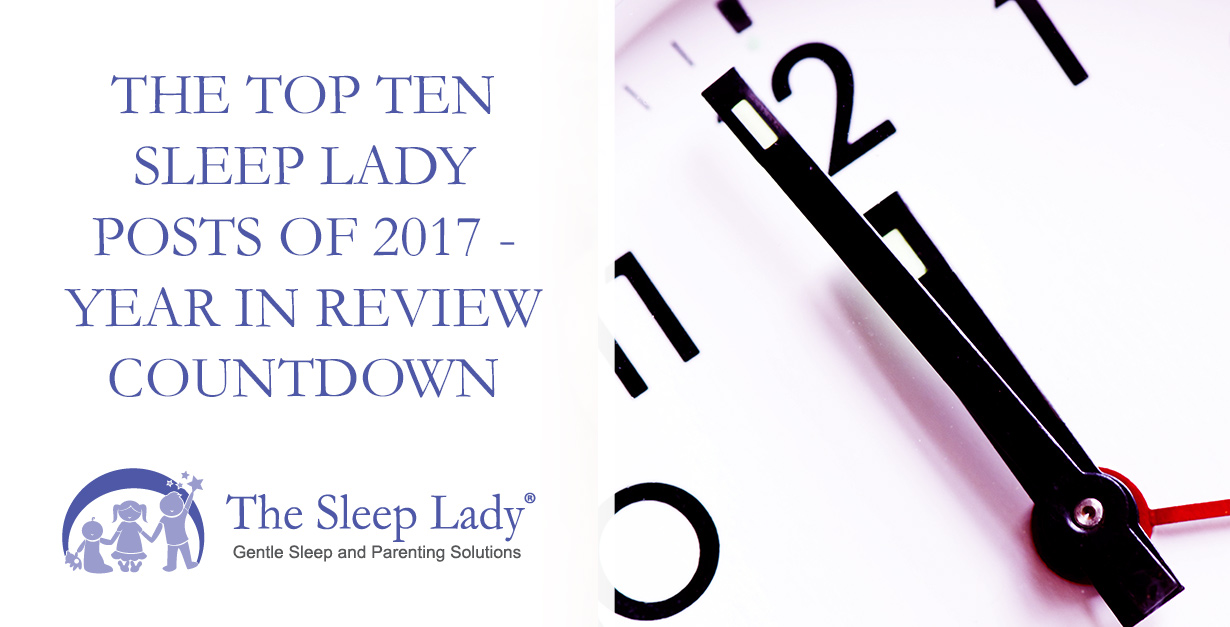 It’s time for a countdown! As we’re getting ready to jump into 2018, we’ve done a little countdown of our own. Here are the ten most-read articles on the Sleep Lady’s blog for 2017. There seems to be a common theme in these — we spent 2017 trying to figure out when our babies were going to start sleeping (again). Bookmark a few for the new year!

10. Why Newborns Wake at Night and 10 Things You Can Do About It

Some newborn babies seem to be born as night owls, with longer stretches of sleep during the day and wanting to be entertained at night. Newborns are not born with fully developed circadian rhythms, and in fact, it will take your baby between 2 and 4 months to sort herself out naturally…
Read the rest, here.

First of all, if you’re still breastfeeding, kudos to you! Breastfeeding is a huge commitment, both emotionally and physically. If you have reached a point where either you have decided to end your breastfeeding relationship or you’d like to move in that direction, you’re reading the right article…
Read the rest, here.

Parents often seem surprised when their babies suddenly morph into little people right around the 2-year mark, complete with ideas of their own, opinions, and lots of attempts at gaining control. It’s a fun age, I promise, but I’ve found that 2 years can also be a time of sleep challenges…
Read the rest, here.

7. Toddler Sleep: Is My Toddler Ready to Drop to One Nap?

Toddlers usually are ready to drop the morning nap by fifteen to eighteen months. A little earlier or a little later is normal, but be sure to watch your child, not the calendar. Especially watch for changes in your child’s morning nap patterns…
Read the rest, here.

We’ve all been there.
Baby has been peacefully sleeping through the night, and, consequently, so is everyone else. Hooray!
And then, out of the blue, your sweet baby is up at all hours, wanting to be soothed, fed, and crying…
Read the rest, here.

5. When Does the 4-Month Sleep Regression End?

Studies have shown that at 4-months there are dramatic changes in your baby’s brain waves and a significant increase in his head circumference! After two to three weeks (possibly more, as sleep regressions CAN last as long as six weeks in some rare cases) of “Mr. Grumpy” you are probably questioning if you’ll ever get your smiley, happy, bundle of joy back…
Read the rest, here.

Logically, we think that development keeps moving forward, but when it comes to two year olds, you’ll notice that there’s a bit of backsliding as they learn new skills and grow up a bit, which includes the potential for another sleep regression…
Read the rest here.

Waking up too early can mean a tired family and earlier naps, throwing off bedtime rituals later. Waking up too late does the opposite, pushing nap time to later in the day and sometimes prolonging bedtime…
Read the rest, here.

You’ve got the schedule down. Baby is FINALLY sleeping more… and then, WHAM! Suddenly she’s not. Welcome to what is commonly referred to as the 4 month sleep regression. Some may refer to this phase as increased wakefulness, but it all amounts to the same thing: you and baby have newly found your groove, and now baby just isn’t acting like herself.
Read the rest, here.

1. Baby and Child Sleep: Sample Schedules From 6 Months to Preschool

Sometimes it seems like babies and young children grow up in the blink of an eye. They leave behind one skill and gain another as fast as you can get out your camera. While they are growing, their sleep needs change too. Your three naps-per-day infant grows quickly into a one-nap toddler, and gradually shifts towards getting all of their sleep overnight. It can be hard to keep up with schedules when they are always changing, so we have put together a handy list..
Read the rest, here.
Well, that’s a wrap! Have a happy and safe New Year!